Robben Ford A Day in Nashville 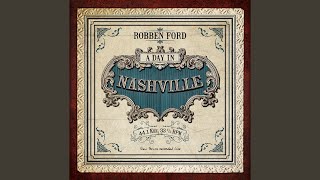 Personnel: Robben Ford (vocals, guitar); Audley Freed (guitar); Barry Green (trombone); Ricky Peterson (organ); Wes Little (drums).
Audio Mixer: Rick Wheeler.
Recording information: Sound Kitchen, Nashville, TN.
Photographers: Anthony Scarlati; Mascha Muenzesheimer.
NOLA-inflected R&B adorned Robben Ford's Bringing It Back Home in 2013, a collection of covers played by an all-star ensemble and highlighted by the guitar slinger's additional skills as an interpretive singer and arranger. When Ford began writing tunes for his follow-up he decided to lay them down in a way seldom employed these days: by recording the entire album in a single day. Ford convened a choice band -- guitarist Audley Freed, keyboardist Ricky Peterson, bassist Brian Allen, drummer Wes Little, and trombonist Barry Green -- at the storied Sound Kitchen Studio in Nashville, and set about recording a live record in a controlled environment. He wrote seven of the nine tunes here, and they walk the line between wonderfully contoured numbers that showcase his much improved singing skills and contemporary, soul-inflected blues. The contribution from Green adds another dimension to the band's sound. Yes, it is polished, but both production and mix are empathic; despite the overdubs, the group's live energy comes through. Opener "Green Grass Rainwater" is shuffling, Southern R&B with excellent guitar fills and vamps, spare, layered, punchy trombone, and swirling B-3. It also features one of Ford's best vocals here. "Ain't Drinking Beer No More," with its swinging combination of B-3 and 'bone, is a high point. "Midnight Comes Too Soon" is a more conventional, contemporary blues, with Ford's guitar in trademark minor-key sting. "Top Down Blues" is a funky instrumental, with Allen's bass leading the charge. The twinned guitars and trombone add strut and swagger before Ford solos. There are two choice covers here: the burning "Cut You Loose" (first recorded by James Cotton) provides canny interplay between the guitarists and Peterson, Little's driving drum in the back, and Allen's rolling bassline. "Poor Kelly Blues," written by Maceo Merriweather, is done Chicago style. Slippery chord voicings by Freed support Ford's taut fills as the rest of the band rave up in the turnarounds. At first, "Thump and Bump," an instrumental jazz tune, seems an odd choice; it isn't, because it's a solid band showcase that reveals what they are capable of. "Just Another Country Road" is a jazzy R&B number that perfectly bookends the opener, featuring the entire band swinging hard. It's got an excellent chart and fills by Green, and it's the only place on the set that Ford really cuts loose. A Day in Nashville isn't raw, but it is immediate and soulful. It is the sound class musicians make when they simply get down to doing what they do best: playing together. ~ Thom Jurek

Robben Ford
Bringing It Back Home
$10
Add to Cart

Robben Ford
Talk to Your Daughter
$15.70
Add to Cart

Robben Ford
Bringing It Back Home
$10
Add to Cart