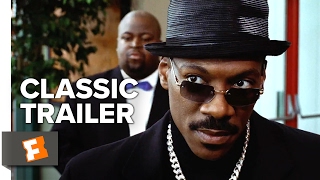 Variety - 10/14/2002
"...Wilson uses Murphy's blowhard bursts for headwind, playing off the heat for a contrasting cool....The combo has its own music and works well..."
Sight and Sound - 02/01/2003
"...The roles are tailor-made for the actors....The two lead performers' divergent styles gel..."
Total Film - 07/01/2003
"...One of the better bickering-buddy flicks of late, I SPY teams Eddie Murphy at his most puffed up and garrulous with Owen Wilson at his most laid back and drawly....An object lesson in ping-pong repartee..."

When the Air Force's newest stealth bomber--complete with cloaking device--disappears, secret agent Alex Scott (Owen Wilson) is sent to Budapest to find it. To Scott's dismay, he is teamed with undefeated middleweight champion Kelly Robinson (Eddie Murphy), who is slated to fight in Budapest where suspected Stealth thief, arms dealer and boxing fan Arnold Gundars (Malcolm McDowell) is throwing a party in honor of the boxers. Scott uses cool spy equipment to encourage the egotistical Robinson to work with him. Initially at odds with each other, the two eventually bond as they're chased through Budapest by Gundar's henchmen, using spy tools and street smarts to foil the bad guys. To complicate matters, Scott has a crush on a sexy agent, Rachel (Famke Janssen), who may or may not have her own agenda. Gary Cole plays superstar agent Carlos, the envy of the other agents and the guy with the coolest spy toys. Directed by Betty Thomas (28 DAYS, DR. DOOLITTLE), the film is loosely based on the 1960s television series of the same name starring Robert Culp and Bill Cosby.