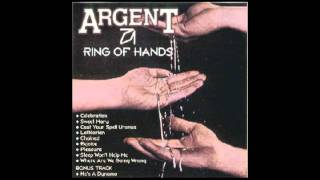 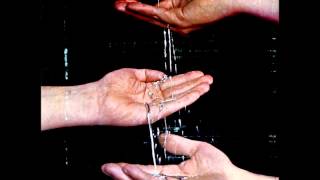 This British Rock quartet was headed by ex-Zombies member Rod Argent. "Ring of Hands", released in 1971, was their second album for Epic. This collection has a decidedly progressive rock feel to it and features a bonus track, "He's A Dynamo", from their "All Together Now" album.

Argent: Rod Argent (vocals, keyboards); Russ Ballard (guitar); Jim Rodford (bass); Bob Henrit (drums).
Includes liner notes by Mark Marymont.
Personnel: Russ Ballard (vocals, guitar); Rod Argent (vocals, keyboards); Robert Henrit (drums).
Ring of Hands is, more often than not, overshadowed by the albums that surrounded it. Argent's debut included Russ Ballard's "Liar," and 1972's All Together Now was the album that yielded their Top Five hit "Hold Your Head Up," while 1973's In Deep produced "God Gave Rock 'N' Roll to You," which became a bigger hit for Kiss in 1992. But Ring of Hands is one of Argent's most progressively oriented albums, with most of its energy and dynamics coming from Rod Argent's keyboard playing. This album shines the spotlight a little brighter on Rod Argent than on Ballard, and its weight lies more on the band's ability to produce some impressive progressive rock than to create lyrically based rock & roll. Argent himself is spectacular throughout most of the album, lending his lone, rich keyboard solos to tracks like "Lothlorien," "Cast Your Spell Uranus," and "Sleep Won't Help Me." The album does wander into pop familiarity from time to time, but only mildly, like on "Chained" or "Where Are We Going Wrong," and, even so, Rod Argent's playing appropriately protrudes through most of songs to give Ring of Hands an independent feel from all of the albums that followed. In 1999, Sony's Collectables reissued the album with a bonus track; Rod Argent's "He's a Dynamo," which was written one year after the release of the original Ring of Hands album. ~ Mike DeGagne