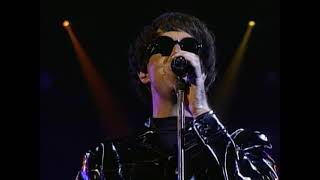 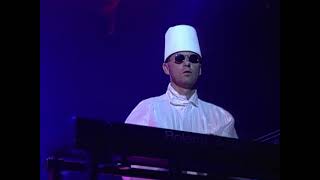 Clash (Magazine) - "Highlights include 'One In A Million', 'Suburbia', a sparkling version of Blur's 'Girls & Boys' which sounds like it could be original material and a stirring version of 'It's a Sin'..."

Photographers: Chris Lowe; Chris Heath.
Pet Shop Boys followed the release of 1993's Very (their only album to top the U.K. charts) with their third world tour, which brought them to Australia, Singapore, and Latin America for the first time. A particularly electric concert in Rio de Janeiro was filmed by a local television crew and released on VHS and Laserdisc as Discovery: Live in Rio in 1995. Inspired by the vibrancy of New York City nightlife, the duo focused the tour on uptempo dance songs, and embraced spontaneity more than they did on their earlier tours, which were more staged and theatrical. They're joined on-stage by a quartet of free-spirited dancers, a pair of percussionists, and charismatic backing singer Katie Kissoon. The energy is more than reciprocated by the audience, who scream, cheer, and sing along throughout the entire show. The arrangements totally embrace the type of hyper-glitzy Euro-dance which was everywhere at the time, and older singles like "Always on My Mind" and "Domino Dancing" sound absolutely huge. Early B-side "Paninaro" is given a reggae-disco remake, sounding even more charged-up than the version released as a single around the same time as Discovery. Elsewhere, PSB nod to several then-current dance hits -- the crowd goes wild when "One in a Million" slides into Culture Beat's "Mr. Vain," as well as the medley of "Left to My Own Devices" and Corona's glorious "Rhythm of the Night." They also perform Blur's cheeky alt-dance classic "Girls & Boys," which they had previously remixed, fully transforming an already PSB-indebted song into one of their own. Wisely, the duo know when to dial the energy down a notch from time to time, so that everyone involved avoids the risk of short circuiting and burning out. In this manner, even "West End Girls" feels like a bit of a comedown. Joking that they were never asked to appear on MTV Unplugged, they offer largely acoustic versions of "Rent" and "Suburbia," which only leave more room for the crowd to shout along. Of course, there's no way they couldn't do this show without ending it with a bang, and the final sequence includes "I Will Survive" into "It's a Sin," an Olympic-sized "Go West," and of course the poignant fan favorite "Being Boring." Long confined to obsolete formats, Discovery was given a long-overdue CD/DVD reissue in 2021. ~ Paul Simpson

62%off
Robert Palmer
The Essential Selection
$7.50
Add to Cart