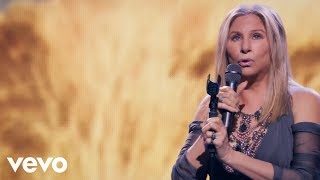 Personnel: Andrea Jones , Stevvi Alexander, Amy Keys (vocals); Mike O'Neill (guitar); Christian Hebel (violin); Brandon Fields (woodwinds); Randy Waldman (piano); Rich Ruttenberg, David Witham, Cheche Alara (keyboards); Dave Tull (drums); Norm Freeman (percussion).
Audio Mixer: Dave Reitzas.
Recording information: American Airlines Arena (Miami, FL.
Photographers: Don Hunstein; Steve Schapiro; Kevin Mazur; Richard Corman; Dave Hogan; Russell James.
The long-standing traditions of Broadway and nightclub stardom were beginning to fade under the influence of rock & roll and the changing tides of popular culture when Barbra Streisand got her big break in the stage musical I Can Get It for You Wholesale in 1962. But Streisand's outsized talent and personality helped keep a glimmer of that brand of show biz glamour alive throughout a career that's spanned six decades, and even in 2016, Streisand doesn't just give a concert, she puts on a show. Streisand launched a 16-date concert tour following the release of her album Encore: Movie Partners Sing Broadway in August 2016, and The Music... The Mem'ries... The Magic! is a live album that preserves her December 5, 2016 performance in Miami. For this tour, Streisand took her fans down memory lane for a look at her past as a performer, as well as offering her own musings on her life, her career, and the world around her. Considering Streisand was 74 years old when this was recorded, her voice is in remarkably good shape; there are clearly notes she can't hit any more, but she glides around them gracefully, and if there are moments where one can sense a strain in her instrument, her phrasing is clever enough to camouflage them. And most of the time, Streisand still possesses the vocal clarity she had in her youth, while her charisma and sense of drama are as powerful as ever. Along with her singing, Streisand delivers plenty of well-rehearsed patter that puts the songs in context while also giving her space to crack jokes (some of them even funny) and talk about her concerns (primarily the environment, politics, and the future of our children). This show was clearly a lovefest for all parties concerned, with the audience often shouting out requests and encouragement, and while there's something just a bit disingenuous about Streisand's efforts to sound surprised and bashful at the way her fans adore her, it's clear they eat it up as much as any part of her act. And if Jamie Foxx seems an unlikely choice to give a spiel about Streisand's brilliance in this show, their duet on "Climb Ev'ry Mountain" absolutely works. Five and a half decades into one of the most remarkable careers in American showbiz history, Barbra Streisand is still a masterful vocalist and performer, and The Music... The Mem'ries... The Magic! is a master class in how a legend gives her audience the show they want and makes the experience sound fresh and vital, even on songs she's literally been singing for decades. ~ Mark Deming

Barbra Streisand
The Third Album
$6.97 on Sale
Add to Cart

63%off
Dame Shirley Bassey
Hello Like Before [Australian Import] (CD)
$5.98 on Sale
Add to Cart