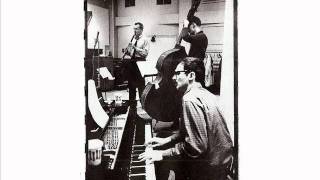 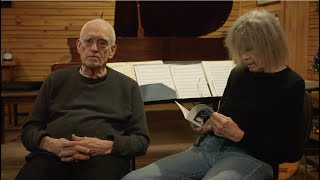 Down Beat - 5/92, p.58
5 Stars - Excellent - "..finds the drumless trio reaching across stylistic boundaries to create a prototype for "chamber jazz" incorporating collective improvisation...sounds fresh and current.."
Musician - 7/92, p.100
"..Where Cecil and Ornette and others were getting expressionistic, these guys were going inward, looking for freedom in quietude...cool, chilly playing.."
Jazziz - Dec.-Jan./92, p.95
Picked by critic Frank-John Hadley as one of the 10 best jazz albums of 1992.

Jimmy Giuffre 3: Jimmy Giuffre (clarinet); Paul Bley (piano); Steve Swallow (acoustic bass).
Producer: Creed Taylor.
Reissue producers: Manfred Eicher, Jean-Philippe Allard.
FUSION recorded in New York, New York on March 3, 1961. THESIS recorded in New York, New York on April 8, 1961. Includes liner notes by Steve Lake and Phillippe Carles.
This reissue of Fusion and Thesis, the two albums the new Jimmy Giuffre 3 made in 1961, prior to their breakthrough and breakup in 1962, is nothing short of a revelation musically. Originally produced by Creed Taylor, who was still respectable back then, the two LPs have been complete remixed and remastered by ECM proprietor and chief producer Manfred Eicher and Jean Philippe Allard and contain complete material from both sessions resulting in one new track on Fusion and three more on Thesis. The music is Giuffre at his finest -- at that point, finding a language with his two collaborators, pianist Paul Bley and bassist Steve Swallow (who hadn't made the permanent switch to electric then) -- that was outside even the avant-garde at the time, yet in the tradition enough for some listeners and critics to be able to hold onto as modern jazz. Both recordings make use of a profound use of subtlety in gesture -- this is more true of Giuffre and Bley than Swallow, but without a drummer, the guy had a tough gig to hold down -- and a creative use of space, one that allowed for a free contrapuntal interplay between musicians while keeping their distance in order to keep the music in front of them. In other words, space was used as a way to communicate what not to do rather than what to play. While most improvisations did stick to ideas based on chord changes, there are moments, many of them on Thesis, where the formal structures slipped into the ether and gave way to an improvisation that used silence as a cue to innovate and improvise (check "Carla," "Sonic," and "Flight" on Thesis, and "Venture" and "Cry, Want," on Fusion). The use of this space is brought to light in the Eicher/Allard remix which highlights and accents the physical distances the three men were playing from one another in the studio. While Fusion features primarily the compositions of Giuffre in his style of accenting counterpoint   la Debussy and Milhaud within a melodic framework, and making the counterpoint and its resultant interaction with other players the still point of harmonic invention ("Brief Hesitation" and "Scootin' About" on Fusion, and "Me Too" and "Whirrr" on Thesis). There are no corners in this music, no jagged edges, everything is rounded off, if not smooth, then at least warm -- no matter how complex the music becomes it has no air of academic elitism or dry didacticism about it, the emotions are transparent and expressed with understatement and grace. This reissue is perhaps, along with Free Fall one of the most essential documents regarding the other side of early-'60s jazz. Giuffre falls clearly between the cracks of the then emergent avant-guardists like Coltrane's quartet, Cecil Taylor, Eric Dolphy, and Ornette's band, and the hard boppers like Horace Silver, Art Blakey, Hank Mobley, and Horace Parlan. Giuffre didn't straddle fences; on Fusion and Thesis, he just walked through them. ~ Thom Jurek

60%off
Bob Brookmeyer / Jimmy Giuffre
Portrait of The Artist / The Four Brothers Sound
$5.98 on Sale
Add to Cart