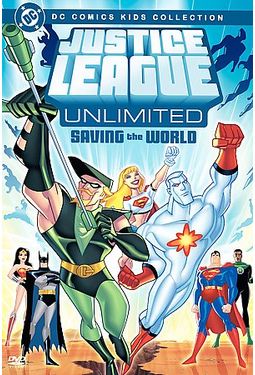 The JUSTICE LEAGUE UNLIMITED are on hand to save the world once again with this collection of episodes from the show. Among the action, Green Arrow prevents a nuclear monster from wreaking havoc; Wonder Woman and two brothers try to stop World War III from occurring; and some of the League are reduced in size and turned into eight-year-olds.

Three new episodes from the most famous superhero library, DC Comics, available for the first time on DVD.
1) "Initiation": A reluctant Green Arrow joins forces with the new Justice League to stop a rampaging nuclear monster in Asia.
2) "Hawk and Dove": Wonder Woman teams up with super-powered two brothers, one warlike, the other a pacifist, to stop Ares' plans to escalate a European civil war into World War III.
3) "Kids' Stuff": Superman, Batman, Wonder Woman and Green Lantern are transformed into eight year olds in a desperate attempt to save the world from the magics of Mordred.