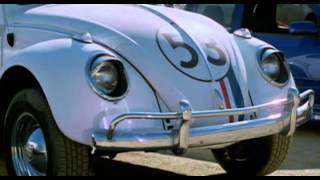 The Love Bug is back! Herbie (AKA #53), the sweet little '63 Volkswagen bug with a mind of his own and a serious love for speed, pairs with Lindsay Lohan in HERBIE: FULLY LOADED for a sunny comedy. Maggie Peyton (Lohan) is a third generation member of a NASCAR racing family and dreams of winning from behind the wheel, but her protective dad Ray Peyton, Sr. nixes the idea, while her brother Ray, Jr. (Breckin Meyer) carries on the family legacy (even though he's not a very good driver). After graduating from college and securing a job at ESPN, Maggie has one month at home before leaving for New York City. When Ray Sr. offers her a car as a graduation gift, they visit a junk yard to pick out a used stock car and end up coming home with a thrilled Herbie. Maggie quickly discovers Herbie is more than just a regular car, and soon they're on their way to realizing her dreams of racing glory while battling ego-inflated champ Trip Murphy (Matt Dillon) with the help of her cute mechanic friend Kevin (Justin Long).

As Maggie, Lohan is spunky, determined, and adorable; young girls will love this inspirational character. Herbie himself is as winning as ever. The movie cleverly opens with highlights of Herbie's past exploits, going all the way back to his debut in 1969 in HERBIE THE LOVE BUG. Older fans of the series will delight in seeing Herbie back in action, while the newly initiated will easily see what makes this car so special. NASCAR devotees should look for cameos from drivers Dale Earnhardt Jr., Jamie McMurray, Casey Mears, Kevin Harvick, and Rusty Wallace. Fun, exhilarating, and touching, HERBIE: FULLY LOADED is the perfect family comedy.

Herbie: Fully Loaded
Start your engines! Lindsay Lohan (MEAN GIRLS, FREAKY FRIDAY) does the driving when Herbie -- the fun-lovin', free-wheelin', '63 VW Beetle with a mind of its own -- returns better than ever in Disney's all-new, revved-up comedy adventure! Though a third-generation member of a NASCAR family, Maggie Peyton (Lohan) has always been forbidden from following her racing dreams by her overprotective father (Michael Keaton ¿ FIRST DAUGHTER). But she has no idea her life is about to take a huge u-turn! After discovering the irresistible Herbie in a junkyard, they form a magical team that will save her family and rewrite the racing record books! With Breckin Meyer (ROAD TRIP), Matt Dillon (THERE'S SOMETHING ABOUT MARY), and an all-star cast along for the ride, you better believe ol¿ Number 53 has some new tricks under his hood!

Cheaper by the Dozen
$6 Super Savings
Add to Cart