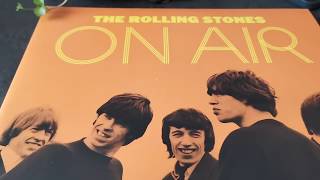 Personnel: Mick Jagger (vocals, harmonica); Brian Jones (guitar, harmonica); Keith Richards (guitar, background vocals); Charlie Watts (drums); Bill Wyman (background vocals).
Audio Remixer: James Clarke .
Heavily bootlegged over the years, the Rolling Stones' BBC sessions from the '60s didn't see official release until 2017, when Universal put out On Air as both a single-disc and double-disc set. The Stones first entered a BBC studio in October 1963 when they were peddling their debut single, "Come On," and their last session arrived in September 1965, just after releasing "Get Off of My Cloud" as the sequel to the smash "(I Can't Get No) Satisfaction." During these three years, the Stones racked up several number one hits in the U.K., but Mick Jagger and Keith Richards didn't start writing in earnest until 1965, which means On Air winds up drawing a portrait of the Stones as a working covers band. This is precisely what they were at the dawn of their career: a quintet playing the Chicago blues and American R&B and rock & roll they loved, discovering their own voice within other people's songs. What's notable about On Air is how quickly the Rolling Stones developed their own signatures within the confines of covers (eight of which the band never cut in the studio). Charlie Watts swings with a vengeance, Bill Wyman counters with percolating bass runs, Mick Jagger sings with a savvy sense of remove, while Brian Jones and Keith Richards are so closely intertwined, it's hard to separate the riffs from the solos. Much of this can be heard on the Stones' studio albums from this period, but the live setting -- done primarily on the Saturday Club show, but also The Joe Loss Pop Show and Top Gear -- heightens the excitement, giving the performances rough edges that are nearly as appealing as the group's interplay. Some of those rough edges are sanded off by an "audio source separation process," where engineers de-mixed the original BBC sessions and then reassembled them into new stereo mixes. A bigger soundstage doesn't necessarily suit the BBC sessions, where the primitive production suits the raw performances -- for proof, listen to the second disc in the deluxe set, which wasn't de-mixed -- but it's ultimately a minor flaw in what's otherwise an essential set. ~ Stephen Thomas Erlewine

65%off
The Yardbirds
Roger the Engineer [Bonus Tracks]
$13.98 on Sale
Add to Cart