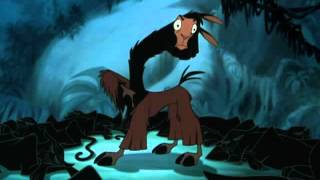 Kuzco (David Spade) is the young, arrogant emperor of a vast kingdom. For his entire life, he has always had everything his own way. When his adviser, Yzma (Eartha Kitt), decides to usurp his power for herself, she has her servant Kronk (Patrick Warburton) poison Kuzco--but something goes wrong, and instead of dying, Kuzco is transformed into a talking llama. The former emperor winds up in the company of Pacha (John Goodman), a simple peasant just evicted from his land by Kuzco's plans for a new summer home. Pacha and Kuzco grudgingly agree to work together to restore Kuzco to his throne--and back to human form--but a series of wacky misadventures and the schemes of Yzma ensure that their journey will be a treacherous one. With THE EMPEROR'S NEW GROOVE, Disney takes a break from the more serious, epic dramas of recent years in order to focus on nonstop comedy and slapstick dialogue. Featuring a series of hilarious stunts and a quick, lighthearted pace, THE EMPEROR'S NEW GROOVE is a bubbly pleasure for viewers of all ages. The film also features Sting's Oscar-nominated song "My Funny Friend and Me."

The Emperor's New Groove: New Groove Edition
If you liked ALADDIN, you'll love Disney's THE EMPEROR'S NEW GROOVE, where outrageous comedy rules! Audiences and critics alike raved about this hilarious animated adventure. "Ebert & Roeper And The Movies" gave it "Two Thumbs Up." Faster than you can say "Boom, baby," arrogant Emperor Kuzco is turned into a llama by his devious advisor, Yzma, and her hunky henchman, Kronk, who want to rid the kingdom of this beast of burden. Now the ruler who once had it all must form an unlikely alliance with a pleasant peasant named Pacha. Together, Kuzco and Pacha must overcome their differences as they embark on a hilarious, "groovy" adventure that will have you howling with laughter.

The Road to El Dorado
$8.70 Super Savings
Add to Cart

The Princess and the Frog (DVD)
$17.60 Super Savings
Add to Cart