Sherlock Holmes and Dr. Watson are in pursuit of a famous stolen diamond aboard the bullet-train from London to Edinburgh. 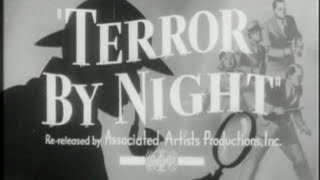 Sherlock Holmes (Basil Rathbone) and Dr. Watson (Nigel Bruce) find themselves amidst murder and thievery on a speeding train from London to Edinburgh. The master sleuths are hired by wealthy Lady Margaret Carstairs to guard the precious "The Star of Rhodesia" diamond. On board, the infamous criminal Colonel Sebastian Moran, a master of disguise, may be posing as any one of the train's passengers. When a Carstairs family member is murdered in his compartment, Holmes sets out to find the murderer and save the diamond. The penultimate entry in Universal Sherlock Holmes series, Terror By Night takes place almost entirely on board a train. Suspicious characters and intrigue lie within each coach, and at every turn of this suspenseful thriller.

Master sleuth Sherlock Holmes (Basil Rathbone) is hired by the wealthy widow Lady Margaret (Mary Forbes) and her son Roland Carstairs (Geoffrey Steele) to prevent the theft of an enormous diamond known as the "Star of Rhodesia." Traveling by train from London to Edinburgh, Holmes guards the priceless jewel with the help of Dr. Watson (Nigel Bruce) and Inspector Lestrade (Dennis Hoey). But when the diamond disappears and Roland is found murdered, Holmes must deduce the murderer's identity from among the speeding train's many suspicious passengers, including Dr. Watson's old friend Major Duncan-Bleek (Alan Mowbray). Dripping with atmosphere and claustrophobic suspense, TERROR BY NIGHT is a true classic in the pantheon of Sherlock Holmes mysteries.

Thieves | Detectives | Classic | Mystery | Suspense | Thriller | Vintage | Murder | Jewels | Sleuth | Theatrical Release | Detective | Trains | Mysteries
This product is made-on-demand by the manufacturer using DVD-R recordable media. Almost all DVD players can play DVD-Rs (except for some older models made before 2000) - please consult your owner's manual for formats compatible with your player. These DVD-Rs may not play on all computers or DVD player/recorders. To address this, the manufacturer recommends viewing this product on a DVD player that does not have recording capability.

The Adventures of Sherlock Holmes
$18.70 Super Savings
Add to Cart

Sherlock Holmes and the Pearl of Death
$18.70 Super Savings
Add to Cart


A solid entry in the Holmesian canon by Universal, combining the best elements of film-making with a fine cast of characters. Although I regret Universal's decision to have Dr. Watson portrayed as a bumbling windbag in the film series, I can't think of any actor who could have pulled it off as well as Nigel Bruce. Bruce adds touches of humor and humanity to the role and, in each of the films, has his dramatic moments. Dennis Hoey is (again) priceless as the gruff police inspector Lestrade who just doesn't get it right, although in this film he does, at last. Set on a train to Scotland, the story allows for excellent character development (mainly of red herrings)and strikes a fine balance between humorous situations (that do not detract from the mystery at hand) and the mysterious, murderous atmosphere that permeates the train. Well-paced fun for all ages.


I remember seeing this as a young boy and fell in love with Sherlock Holmes. It has always been one of my favorites, I'm so glad that they are starting to put them on dvd. You will love this movie. A little bit of action, a little bit of humor and of course the interplay between Holmes and Watson.