The Other Side of Midnight R 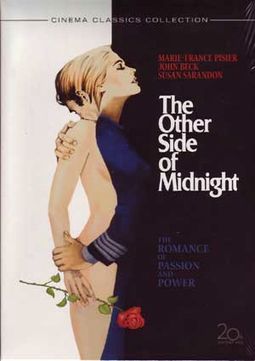 2.3K ratings
Currently Out of Stock: We'll get more as soon as possible
Notify Me When Available
Add to Wishlist
Format:  DVD
item number:  XSUR 01194D
91% recommend us!

During the turbulent years prior to the outbreak of the Second World War, a young French girl travels all over the world, involving herself in one sordid affair after another. Based on Sidney Sheldon's gratuitous novel. Academy Award Nominations: Best Costume Design.

Based on Sidney Sheldon's bestseller, "The Other Side of Midnight" is the story of Noelle, a naïve young French woman who falls for a handsome American aviator during World War II. But when the war ends, Noelle waits in vain for her handsome flyer to return. Alone and abandoned, the young woman finds that she has to make her way by selling her body. Fortune is kind to Noelle, however, and she quickly discovers that she can make her sex appeal pay off_and sleeps her way into movie stardom. All this time she keeps tabs on her prodigal aviator, who had returned to the US following the war, and started a family. Several years later, when his career goes bust, Noelle, now wife of a Greek mogul, arranges to hire her former lover as her private, pilot in order to taunt him. Not recognizing his wealthy boss as the fragile young mistress he knew during the war, he is bewildered by Noelle's ill treatment of him. But as time passes Noelle finds that this game of deception leads them both into very deadly territory.

Windmills of the Gods
$12.10 Super Savings
Add to Cart