The Woggles Rock and Roll Backlash 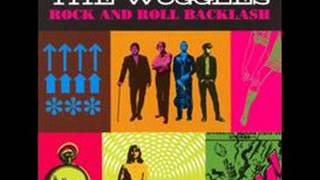 The Woggles: Flesh Hammer (background vocals); The Professor Mighty Manfred, Dan Elektro, Buzz Hagstrom.
Personnel: The Professor Mighty Manfred (vocals); Camilo Ochoa, Camilo Ochoa, Randy Skinner (trumpet); Joe Burton (trombone); Buzz Hagstrom (bass guitar, background vocals); Dan Elektro (drums, percussion, background vocals); Mace Hibbard, Eddie Boyd (saxophone); Kevin Hyde (trombone).
Recording information: Bakos Amp Works, Atlanta, GA; Kudzu Ranch, Mebane, NC; Maxwell Sound Studio, Athens, GA.
The Woggles aren't trying to reinvent the garage rock wheel, but after slogging it out in every dive club imaginable since 1987, they realize that bringing new spins to the formula neither dilutes it nor opens them up to the dreaded sellout finger-pointing. Recorded at Rick Miller's (Southern Culture on the Skids) Kudzu Ranch in North Carolina, produced by Jeff Walls (ex-of Guadalcanal Diary), and mastered by the near legendary Rodney Mills, the quartet has a formidable backline for its first album in four years. The guys rise to the occasion with some of their finest material. The Woggles have experienced a surge in popularity through exposure on Little Steven's weekly radio show. Since this album is released on his Wicked Cool label, that is likely to continue. Little has changed in the group's approach, though a bit more British Invasion mixed with American garage invigorates the sound of these 12 originals. There is even a spaghetti Western throwback with reverbed guitar and mariachi trumpet ("El Toro"). Occasional horns on a few other tracks also prove that different ingredients added to their established jittery rock & roll stew can bring much needed spice to the concoction. Lead singer the Professor Mighty Manfred is in fine trashy shape, as is the foursome's recent guitarist, known only as Flesh Hammer. Songs such as "Time of My Own" and the title track boast singalong hooks and lyrics that veer toward the members' obvious love of an earlier time and their dedication to saving the purity of rock & roll. You won't need any convincing that they are up to the task after one spin of this raw, rollicking slab of retro-rocking. It's a trip back to the '60s when the Standells, the Seeds, and all the other bands on the Nuggets collection were making music that might have seemed disposable at the time but is now considered classic. Add the Woggles to that pack, because they are every bit as committed, brash, and raw -- and Rock and Roll Backlash is all the evidence you need. ~ Hal Horowitz

50%off
Launderettes
Fluffer Folds: The Best of the Launderettes (CD)
$4.98 CD Sale
Add to Cart