Record Collector (magazine): 4 stars out of 5 -- "STARLESS AND BIBLE BLACK was originally released in 1974, with the majority of the tracks forged through live improvisation."

Get email alerts for King Crimson
Out of Print: Future availability is unknown
Notify Me When Available
Add to Wishlist
Format:  Vinyl LP
item number:  768XW
Our customers love us! 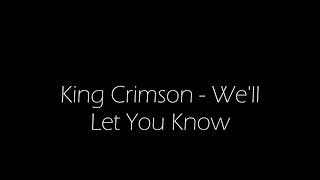 Q - 11/00, p.129
3 stars out of 5 - "...A stolid affair - proof of the band's road-hardened discipline....envincing a lofty...ambition which they rarely, if ever, matched again."
Uncut - p.91
3 stars out of 5 -- "Crimson's four-way interplay is laid out afresh in this new stereo mix by Robert Fripp and Steven Wilson."
The Wire - 10/00, p.77
"...Mostly recorded live, it ranges from isolation tank bliss to monolithic rock heaviness of the closing 11 minutes of 'Fracture'..."
Record Collector (magazine) - p.95
4 stars out of 5 -- "STARLESS AND BIBLE BLACK was originally released in 1974, with the majority of the tracks forged through live improvisation."

The initial pressing of STARLESS AND BIBLE BLACK is packaged in a cardboard-stock gatefold sleeve.
King Crimson: John Wetton (vocals, bass); Robert Fripp (guitar, mellotron); David Cross (violin, viola, keyboards); William Bruford (percussion).
Digitally remastered by Robert Fripp.
After the transitional ISLANDS, LARK'S TONGUES began the third Crimson phase that continued with STARLESS and ended with RED. The quartet of David Cross, John Wetton, Robert Fripp and Bill Bruford (augmented on LARK'S TONGUES by madman percussionist Jamie Muir) is regarded as the most innovative of Crimson's many lineups, offering hard-edged improvisations on an unprecedented level. With founding member/lyricist Pete Sinfield departed, Robert Palmer-James stepped in with a more cutting, concise lyrical approach that matched the group's uncompromising instrumental precision.
STARLESS takes the furious improvisational style inaugurated by it's predecessor and takes it to new heights. Tunes like "We'll Let You Know" and "Fracture," while based around typically devilish Fripp guitar figures and complicated time signatures, lean heavily on the spontaneity of the band's no-holds-barred interaction for their fireworks. The drumless "Trio" is 100 percent improvisation and inspiration. "The Great Deceiver" is about as close to a standard "rock" tune as STARLESS gets, Wetton's throaty vocals leading the charge. Even on this, one of Crimson's pointiest, nastiest efforts, there's room for a poignant ballad, "The Night Watch," which ranks among the band's best.