Into the Night (Blu-ray) R 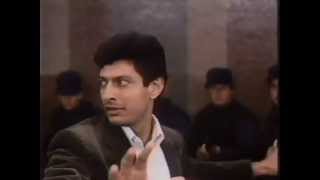 Into the Night 1985 TV trailer 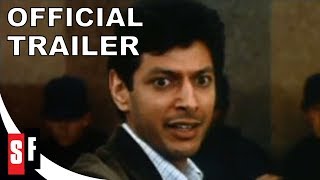 INTO THE NIGHT is a moody adventure/thriller starring Jeff Goldblum as Ed Orkin, a guy smack in the middle of a midlife crisis: He can't sleep, he loathes his job, and he's just discovered his wife in bed with another man. So he takes off to the airport, hoping to flee Los Angeles for anyplace interesting. But while he's glumly trying to figure out just where to go, excitement unexpectedly comes his way in the form of a beautiful woman (Michelle Pfieffer) who leaps into his car with six stolen emeralds in her possession--and bands of thugs chasing her for the loot. Suddenly life doesn't seem so boring anymore. John Landis's charming film features, as usual, a wide array of director and celebrity cameos.

Ed Orkin (Jeff Goldblum) is having a bad night. He can't sleep, he hates his job as an aerospace engineer, and he's just discovered his wife in bed with another man. Suffering another sleepless night, he attempts to flee the disaster of his life, driving into the Los Angeles airport parking lot at the same time that a mysterious and beautiful woman (Michelle Pfeiffer) lands on his windshield. The mysterious Diana has smuggled six emeralds into the country and is being chased by Iranian gangsters who have just killed her companion. Suddenly Ed and Diana find themselves thrown together in an effort to outrun the gangsters. The fugitives become involved in one disaster after another, narily escaping Elvis-crazed relatives, insanity on the freeways, a terrifying hitman played by David Bowie, and general mayhem during the fast-paced chase. The gangsters wreak havoc on L.A., destroying anything they come into contact with as they pursue the star-crossed fugitives in this seductive and moody portrayal of Los Angeles after hours. This dark thriller/comedy features cameos by numerous directors as well as Landis himself, playing a gangster.