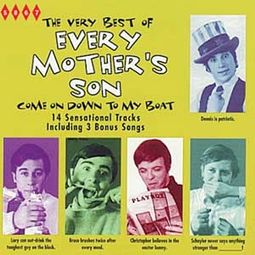 Get email alerts for Every Mother's Son
6 ratings
Unavailable: Sold Out
Notify Me When Available
Add to Wishlist
Format:  CD
item number:  ZSUR 40107
91% recommend us!

Led by brothers Dennis and Larry Larden, Every Mother's Son was a Rock quartet that got its start in Greenwich Village in the mid-'60s. These MGM recording artists are best remembered for their top 10 hit, "Come On Down To My Boat" in 1967. This very best of collection features their most famous songs plus three bonus tracks.

Liner Note Author: Mark Marymont.
Collectables' Come On Down to My Boat contains the entirety of Every Mother's Son's eponymous debut, which included their huge hit "Come On Down to My Boat," plus three bonus tracks -- "Put Your Mind at Ease," "Pony With the Golden Mane," "No One Knows" -- which were all minor hit singles in the years following their lone Top Ten hit. "Come on Down to My Boat" is one of the great one-shots of the '60s, and not surprisingly, there's nothing nearly as memorable on the remainder of the record, but there are some enjoyable pop-rockers in the same vein. It may not contain much from the group's second record, but the fact that it contains all of the group's hits, plus a representative selection of lesser-known material, makes this a fine summation of the group's career. ~ Stephen Thomas Erlewine