Spin: "...Prog was always heady, but Crimson made it heavy. And this is the heaviest Crimson of all....If you're wondering where Tool came from, start here..." 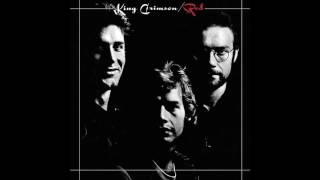 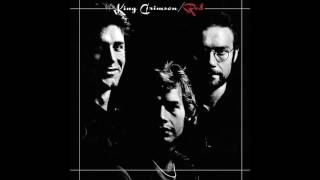 Spin - 01/04, p.48
"...Prog was always heady, but Crimson made it heavy. And this is the heaviest Crimson of all....If you're wondering where Tool came from, start here..."
Q - 7/01, p.87
Included in Q's "50 Heaviest Albums of All Time".
Q - 11/00, p.129
3 stars out of 5 - "...With rockers that rock and a lilting English melancholy that tugs at the heartstrings...[It] envinces a lofty...ambition which they rarely, if ever, matched again."
The Wire - 10/00, p.77
"...The real gravy. Now down to the brutal trio of Fripp, bassist Wetton and drummer Bill Bruford, RED is 40 minutes of cathartic noise..."
Pitchfork (Website) - "RED stands as one of classic rock's heaviest, most meticulous albums. With its dark, meditative sheen, it laid the groundwork for Robert Fripp's more atmospheric work to come."

The initial pressing of RED is packaged in a cardboard-stock gatefold sleeve.
King Crimson: John Wetton (vocals, bass); Robert Fripp (guitar, Mellotron); David Cross (violin, viola); Bill Bruford (drums, percussion).
Digitally remastered by Robert Fripp.
After the transitional ISLANDS, LARK'S TONGUES began the third Crimson phase that ended with RED. The quartet of David Cross, John Wetton, Robert Fripp and Bill Bruford (augmented on LARK'S TONGUES by madman percussionist Jamie Muir) is regarded as the most innovative of Crimson's many lineups, offering hard-edged improvisations on an unprecedented level. With founding member/lyricist Pete Sinfield departed, Robert Palmer-James stepped in with a more cutting, concise lyrical approach that matched the group's uncompromising instrumental precision.
Cross was relegated to guest status on RED, but still makes his presence felt, as do returning Crimson vets Mel Collins and Ian McDonald on saxes. The ominous, hard-edged aspect of Crimson's sound has always been alleged as an influence on early heavy metal, and RED, their heaviest, makes it clear why. The Wagnerian tendencies of early Crimson are magnified here, but the airy-fairy "prog-rock" trappings are discarded in favor of a sound that melds hard rock, modern classical music and jazzy improvisation. The resultant fusion-oriented sound is like a darker, rockier cousin to Tony Williams' Lifetime or the Mahavishnu Orchestra (or the repeating riff cycle that ends the Beatles' "She's So Heavy."