Here's laughing at you, kid. 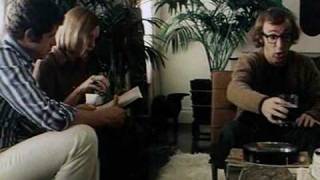 Woody Allen's play makes a successful leap to the big screen in this hilarious romp, directed by Herbert Ross (THE SUNSHINE BOYS, STEEL MAGNOLIAS). Allen has never been better as Allan Felix, a neurotic New York film critic who has just broken up with his wife, Nancy (Susan Anspach). This devastating event has caused him to spiral into a deep depression and look for solace in the classic movies that he loves, particularly the romantic saga CASABLANCA. Allan begins to have conversations with the fantasy ghost of his film idol, Humphrey Bogart (Jerry Lacy), who gives him advice on romance and masculinity. Worried about their insecure friend, Linda and Dick (Diane Keaton and Tony Roberts) spark Allan into action, which leads to a series of disastrously funny blind dates in which Allan tries, but fails, to be as cool as Bogie. Allan's love life is clearly going nowhere, until his quest for romance unexpectedly leads him into the arms of Linda.

With PLAY IT AGAIN, SAM, Allen's comedic talents are on full display. One-liners, neurotic pathos, and keen observations are all unleashed in a boundless frenzy, rarely giving viewers a chance to breathe before the next laugh. Keaton and Roberts prove to be the perfect partners-in-crime for Allen, both actors having that undeniably charming blend of sweetness and absurdity. A tribute to two of Allen's favorite topics--cinema and romance--PLAY IT AGAIN, SAM is another classic contribution to the Allen oeuvre.