In a town where nothing ever happens... everything is about to happen to Sully. 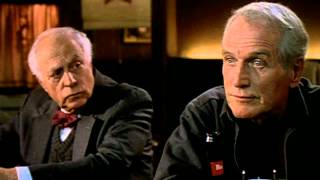 Paul Newman stars as Donald "Sully" Sullivan in Robert Benton's adaptation of the Richard Russo novel. A 60-year-old part-time laborer who lost touch with the wife and children he abandoned--along with most of his other responsibilities--years ago, he's a marginal but familiar figure in the small town he inhabits in upstate New York. He conducts a mild, ongoing flirtation with Toby Roebuck (Melanie Griffith), the wife of Carl (Bruce Willis), a local contractor who frequently employs Sully (and who Sully's currently suing for worker's compensation). His ready wit, surprisingly sharp observations, and willingness to tweak bad-tempered authority figures are appreciated by the cronies with whom he drinks and plays poker. Things begin to change for Sully when his long-lost son, Peter (Dylan Walsh), arrives in town for Thanksgiving with his family. A college professor recently let go from his job, Peter remains in town with one of his sons after a spat with his wife, and for the first time he and his father get to know one another. Sully also gets to play grandfather to young Will (Alexander Goodwin), an experience he seems to enjoy. As much a portrait of a small town's engaging characters as it is the story of a ne'er-do-well coming to grips with his past, this affecting film features a superbly muted performance by Newman; an outstanding supporting cast, including Jessica Tandy (in her last film), Philip Bosco, and Philip Seymour Hoffman; and a funny, rueful script from Benton.

A 60-year-old construction worker in upstate New York deals with life the only way he knows how in this quiet, moving adaptation of Richard Russo's novel.

The Color of Money
$6.50 Super Savings
Add to Cart