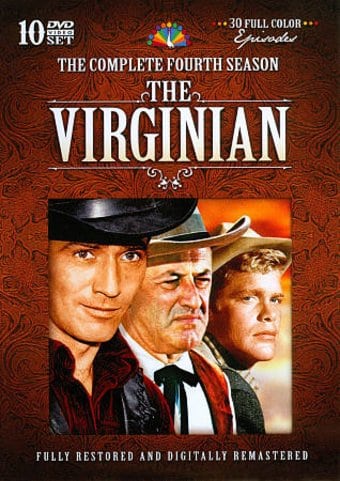 NBC's long-running series THE VIRGINIAN checks in as noteworthy for many reasons, not the least of which is its status as the first 90-minute western in U.S. television history. It also retains historical interest for bringing into the limelight supporting actors (such as future SIX MILLION DOLLAR MAN and FALL GUY Lee Majors) who later graduated to superstardom in other series and movies. The program, as many will recall, starred James Drury as the title character, a nameless fellow in the 1890s who turned up to repeatedly enforce his own brand of justice on a Wyoming Territory. Supporting cast members included a pre-EXORCIST Lee J. Cobb as Judge Henry Garth, plus Doug McClure as Trampas. This package features all thirty episodes from Season Four, which aired from September 1965 through April 1966. Guest stars this season include Ed Begley, Leslie Nielsen, John Doucette and John Mitchum.