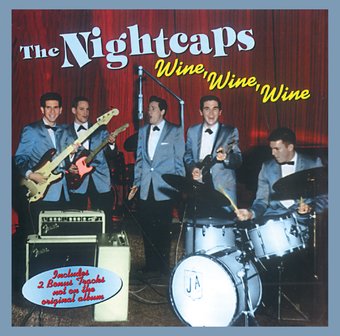 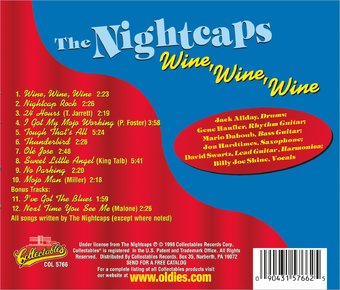 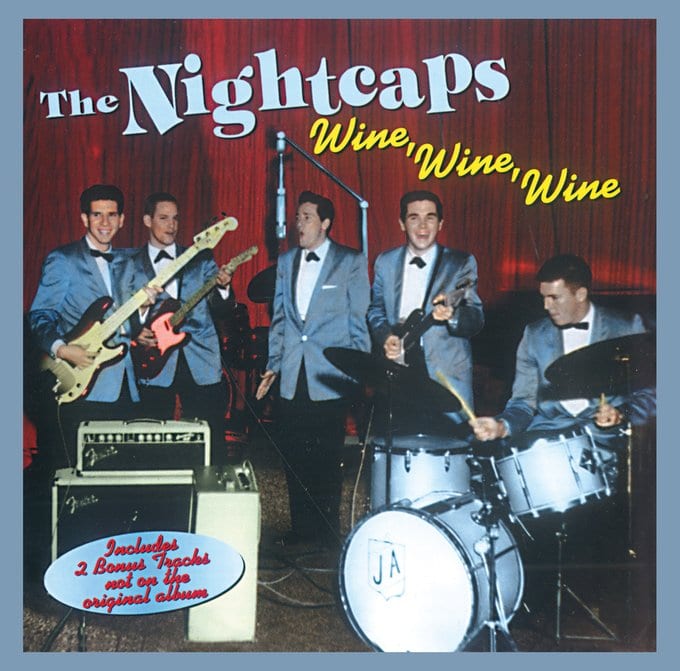 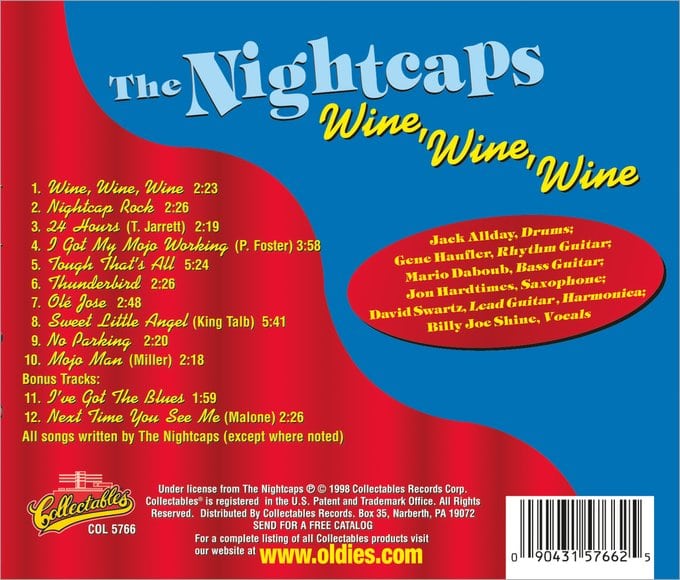 The Nightcaps are one of the best bands to ever come out of Texas - among their biggest fans were Stevie Ray Vaughn and ZZ Top (who covered their song, "Thunderbird")! The group scored many hits on local radio stations ("Wine, Wine, Wine" was a best-seller in Dallas) but it's a shame that they never broke out nationally. The group always performed to appreciative crowds and are still performing today. Disc includes two bonus tracks not included on their original album.

The Nightcaps: Billy Joe Shine (vocals); Gene Haufler, David Swartz (guitar); Mario Daboud (bass); Jack Allday (drums).
Personnel: Billy Joe Shien (vocals); David Swartz (guitar, harmonica); Jon Hardtimes (saxophone); Mario Daboub (bass guitar); Jack Allday (drums).
Every so often, in the course of unearthing rock & roll history, Collectables records stumbles on a real treasure -- a musical jewel of such diamond-like symmetry and beauty, that it just makes those in its presence stop to appreciate its perfection, right down to sharp edges of its facets. These boys meshed rockabilly, R&B, Chicago blues, Delta blues, and rock & roll into a seamless whole with the kind of ease and spontaneity that recalls Elvis Presley's earliest sessions for Sun records. The Wine, Wine, Wine album is as perfect a blues-based rock & roll album as was ever produced by any white band, and one of the most enduring and endearing pieces of music of its era. The title-track and "Thunderbird" are the most well-known cuts here, rock & roll/rockabilly standards that are still covered by Texas bands today, but this album is filled with material that's just as good, three killer blues covers ("I Got My Mojo Working," "Sweet Little Angel," "Mojo Man"), two first-rate rock-flavored instrumentals, and a third ("Tough That's All") that's as good as any blues instrumental ever cut by any white band. The CD is in excellent sound and features two bonus cuts, "I Got the Blues" and the smooth, bluesy rocker "Next Time You See Me." By all indications, Jimmie Vaughan and Stevie Ray Vaughan wore out their share of copies of the LP version of this record when they were growing up, and ten seconds into the CD it'll be no mystery why. Oh, and as a footnote to this amazing record, the saxman credited on the original LP as "John Hardtimes" is none other than jazz reedman John Hardee, stepping out of retirement for one session. ~ Bruce Eder