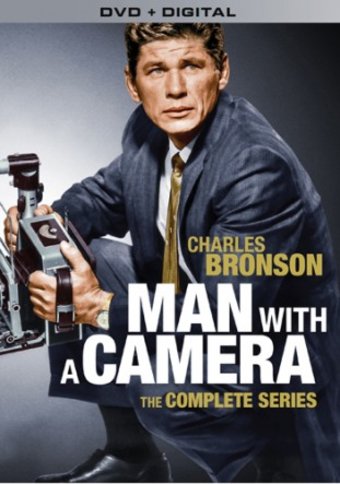 Charles Bronson stars as Mike Kovac, a veteran combat photographer who is now works as a New York City freelance photographer. Kovac specializes in getting those hard to capture photos that other photographers cannot take. Kovac utilizes his police contacts in learning about those cases that might bring him the perfect picture. Collection includes all 29 episodes from the series, which originally aired in 1959-1960.

Customer Rating:
Based on 241 ratings.


Mill Creek Entertainment has done it again! Their latest entry, Man with a Camera, is a sure fire hit! This show premiered on the ABC network for 2 seasons 1958-60 with 29 action packed episodes! Charles Bronson stars as a freelance photographer named Mike Kovac, who spends most of his time running from danger and taking photos than throwing punches! Viewing a very young Charles Bronson, you could tell that he was going to be a major movie star and some other stars that you might recognize like Lawrence Tierney and Angie Dickinson are here to entertain you! So, if you are a fan of Charles Bronson, this DVD set is a must get and if not, this entertaining series will definitely be an eye opener for nostalgia television fans!