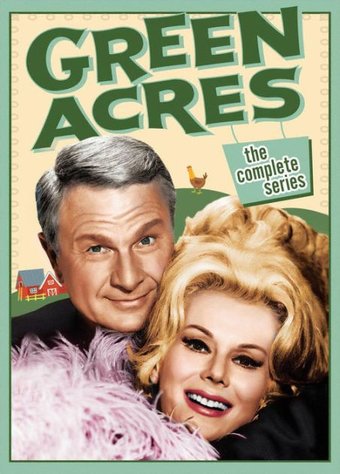 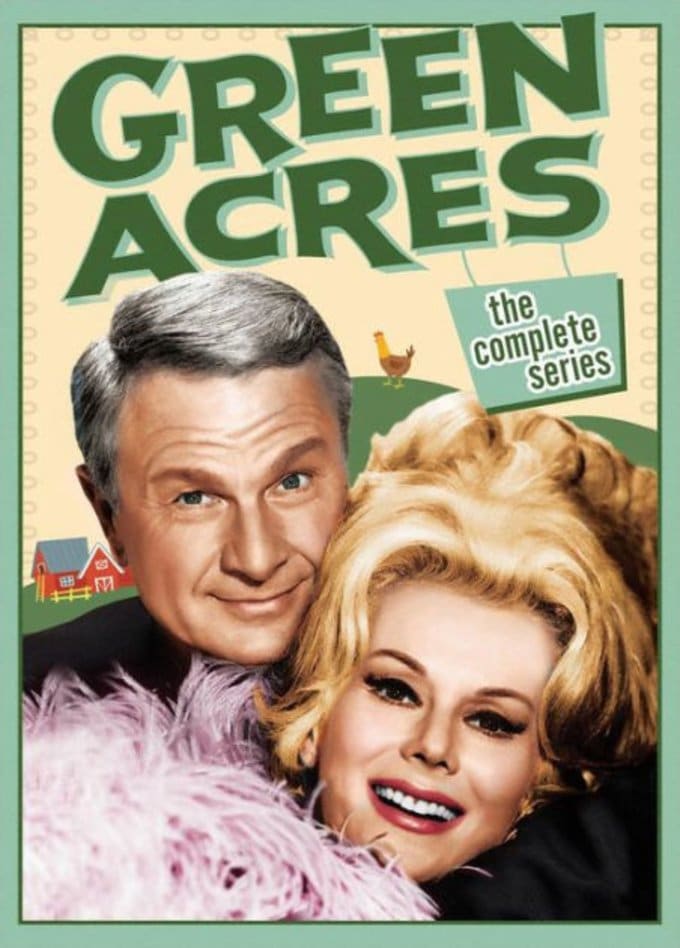 The third of producer Paul Henning's enormously successful "rustic" comedies of the 1960s, GREEN ACRES made its CBS bow on September 15, 1965. Reversing the situation established on Henning's THE BEVERLY HILLBILLIES, in which a group of yokels was transplanted to luxurious Beverly Hills, GREEN ACRES stars Eddie Albert as prosperous Manhattan attorney Oliver Wendell Douglas, who to fulfill a lifelong dream forsook his sophisticated surroundings to become a farmer in the tiny rural community of Hooterville. Reluctantly going along for the ride was Oliver's sexy Hungarian wife, Lisa (Eva Gabor), who though she eventually resigned herself to farm life still insisted upon wearing expensive clothes and jewelry while milking cows and plowing the North 40. Alas, she never quite learned to cook, and her rock-hard hotcakes would soon become the source of many hearty laughs from the viewers. Unfortunately for Oliver, the farm he purchased was in deplorable condition, and the surrounding 160 acres weren't much better. Our hero had been suckered into this situation by bucolic con artist Mr. Haney (Pat Buttram), who continued to fleece the Douglases by selling them expensive -- and generally useless -- farm implements and creature comforts throughout the series' six-season run.

Mr. Haney was but one of the many eccentric characters who seemed to have been put on earth to make Oliver Douglas' life miserable. Others included county agent Hank Kimball (Alvy Moore), who never made a statement without immediately contradicting himself ("Good morning, Mr. Douglas. Well...it isn't really good because it's gonna rain...and it's after noon, so it's not really morning..." etc., etc., etc.); doltish handyman Ed Dawson (Tom Lester), who looked upon the Douglases as his surrogate parents and constantly prevailed upon them to bail him out of trouble (usually girl trouble); carpenters and twin siblings Alf and Ralph Malone (Sid Melton and Mary Grace Canfield), who never quite managed to finish construction on the Douglases' bedroom; and neighboring farmer Hank Ziffel (Hank Patterson) and his wife, Doris (played first by Barbara Pepper, then by Fran Ryan), owners of a TV-watching pig named Arnold, who regarded himself as a human being -- and who developed into the series' biggest "superstar"!

Inasmuch as GREEN ACRES was the sister series to Paul Henning's PETTICOAT JUNCTION -- also set in the mythical village of Hooterville -- there were a number of crossover episodes between the two programs. Also, Frank Cady appeared as storekeeper Sam Drucker on both shows, while one of PETTICOAT JUNCTION's main characters, Uncle Joe Bradley (Edgar Buchanan), dropped in from time to time. One of the series' most endearing trademarks was its strain of surrealistic humor. This manifested itself in many ways, but none quite as memorable as the method in which the opening credit titles were presented. In several installments, a confused Lisa Douglas would comment upon "those little names" that appeared in front of her on the screen; and in at least one instance, the directorial credit showed up on a newly laid egg! Although it is not generally known, GREEN ACRES was based on a radio series titled Granby's Green Acres, which like its TV counterpart was created by Jay Sommers and written by Dick Chevillat. All but one of the TV series' episodes was directed by Richard L. Bare, a past master at depicting comic frustration, as could be seen in his wonderful "Joe McDoakes" theatrical shorts of the 1940s and '50s. GREEN ACRES might well have run forever had CBS not decided during the 1970-1971 season to purge itself of all its "rural" comedies; thus, the series came to an end on September 7, 1971, still as popular and hilarious as ever.