I was feeling blue, but I'm better now. 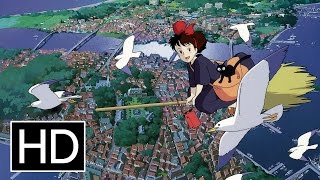 "Without even thinking about it, I used to be able to fly. Now I'm trying to look inside myself to find out how I did it. But I just can't figure it out."--Kiki to Ursula
"We fly with our spirit."
- Kiki to Ursula

Set in a time when airships still ruled the skies and World War II never happened, KIKI'S DELIVERY SERVICE is a coming-of-age tale that explores the difficulties of being a young witch. On her thirteenth birthday, budding witch Kiki is in a hurry to leave her family and establish her independence. With only her talking pet cat as a companion, Kiki is attracted to the bright lights of a beautiful port city, but finds that making friends is not easy. Using her skill at riding a broom to start an express delivery service, Kiki quickly discovers that she cannot take her unique abilities for granted. The film is based on the book MAJO NO TAKKYUBIN by Eiko Kadono, a Japanese writer of children's books; the title literally means "Witch's Special Express Delivery." Like Miyazaki's MY NEIGHBOR TOTORO, KIKI is languidly paced--the better to appreciate the level of detail of the film's animation. KIKI differs from the typical "witch" film, like THE CRAFT: Kiki's abilities serve not as a symbol for evil or for ultimate power, but for the talents that lie within the reach of every girl. The film was dubbed in English by several prominent actors, including Kirsten Dunst, Phil Hartman, Janeane Garofalo, and Debbie Reynolds.

On her thirteen birthday, budding witch Kiki must head off into the world to start her training and find herself. Moving away from her family with only her pet cat as a companion, Kiki parlays her best skill--riding a broom--into a brisk cottage business. Dubbed in English by big-name actors under the auspices of U.S. distributor Disney, including the vocal talents of Kirsten Dunst, Phil Hartman, Janeane Garofalo, and Debbie Reynolds.

Whisper of the Heart
$16.30 Super Savings
Add to Cart

89%off
Blade of the Immortal, Volume 3: No Virtue In Forgiveness
$2.38 Winter Sale
Add to Cart