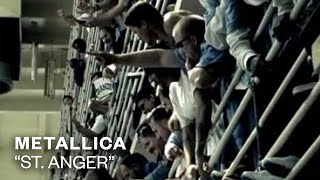 This is a Hyper CD, which contains both regular tracks and also provides a link to the artist's website with the help of a web browser.
Metallica: James Hetfield (vocals, guitar); Kirk Hammett (guitar); Rob Trujillo (bass); Lars Ulrich (drums).
Additional personnel: Bob Rock (bass).
Recorded at HQ, San Rafael, California between May 2002 and April 2003.
"St. Anger" won the 2004 Grammy Award for Best Metal Performance.
Audio Mixer: Bob Rock.
Recording information: HQ, San Rafael, CA (05/2002-04/2003).
Director: Wayne Isham.
Editors: Tracy Loth; Jean Pellerin; Greg Rodgers; Gary Rodgers.
Illustrator: Matt Mahurin.
Photographer: Anton Corbijn.
While LOAD and its sequel RELOAD, Metallica's final studio offerings of the '90s, found the band expanding their approach in what fans called "maturation" and detractors called "mellowing out," the band's first album of the 21st century is a powerful retrenchment and call-to-arms for the heavy metal faithful. Not since the bygone days of MASTER OF PUPPETS (and perhaps not even then) has Metallica sounded this furiously unrelenting.
There's virtually no letup from the frenetic musical mayhem of the appropriately titled ST. ANGER, and nary a power ballad in sight, as the guitars blare and drums rage from one gut-assaulting tune into the next at a breakneck pace. One is reminded of the pure sonic fury of vintage Motorhead, the only band before Metallica to convincingly combine metal tonalities with punk energy. The brilliantly clear production is a blessing that maximizes every bone-crunching riff and jackhammer drum hit for an intensified sucker-punch that will leave even longtime fans reeling with the sheer heaviness of it all. ST. ANGER is surely one of the most effective metal albums of the early '00s, and a bracing lesson for all the nu-metal brats on how it's meant to be done.