The O'Jays Back On Top 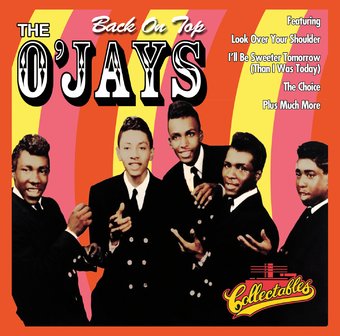 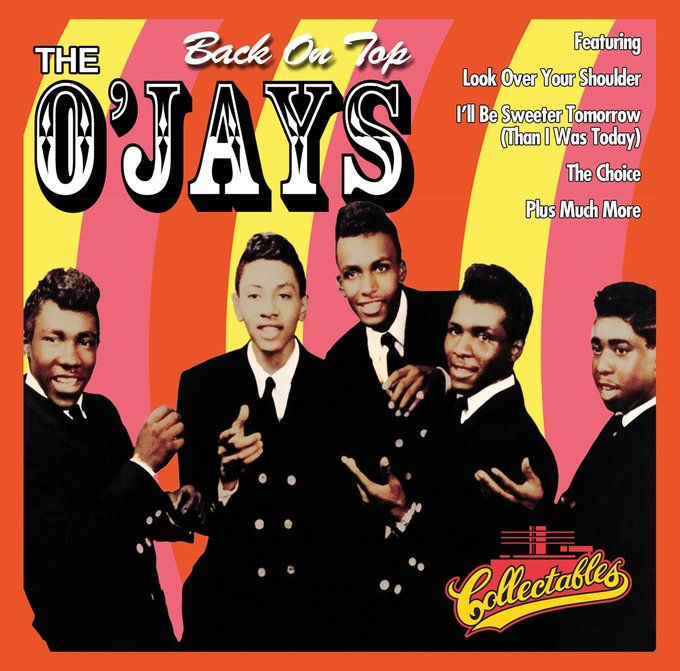 Get email alerts for The O'Jays
15 ratings
Available: Usually ships in 1-3 business days
Add to Cart
Add to Wishlist
Format:  CD-R
item number:  COL 5707
Products with a similar style:
The Spinners: From Here To Eternally / Love Trippin' (CD) $5.98
91% recommend us!

The O'Jays began their career in Canton Ohio as The Triumphs. They recorded as The Mascots before taking on the name The O'Jays and beginning their two decade period of critical and popular success. Their first major hit, "I'll Be Sweeter Tomorrow (Than I Was Today)" is just one of the highlights of this collection which features their stellar work from the mid-'60s.

The O'Jays: Eddie Levert, Walter Williams, William Powell, Bob Massey, Bill Isles.
Personnel: Walter Williams , Eddie Levert, William Powell (vocals).
Liner Note Author: Mark Marymont.
The album cover deceptively depicts five O'Jays when actually only four members -- Eddie Levert, Walter Williams, William Powell and Bobby Massey -- sing on these tracks; Bill Isle, the fifth member, quit in the late '60s, and the cover was shot in the mid-'60s, when the group recorded for Imperial Records. George Kerr produced most of these tracks, with some productions from the Poindexter brothers; the recordings were originally released on Bell Records. "I'll Be Sweeter Tomorrow," a gorgeous ballad, became their highest chart entry to date. The follow-up, "Look Over Your Shoulder," nearly duplicated its predecessor's success; both were indicators of good things to come. The B-sides of the aforementioned, "I Dig Your Act" and "I'm So Glad I Found You," were both quality uptempo grooves, and all four sides were led by Eddie Levert. Walter Williams handled the lead on their third 45 for Bell Records, "The Choice," an energetic message about finding yourself. It did poorly, and its flip, "Going, Going, Gone," had more in common with the first two releases but was not nearly as compelling. The fourth single, "I Miss You," didn't receive much play, even in the Cantonian's adopted hometown of Cleveland. The slow, meandering ballad just didn't have enough of the right stuff. The flip, "Now That I Found You," featured Levert and Williams alternating leads on the same song for the first time. Two more singles were released by Bell: "Don't You Know a True Love When You See It," which was a drastic change in their style, and "Four for the Price of One," released in 1973 to capitalize on their success at Philadelphia International Records. Bell slapped "Look Over Your Shoulder" onto the flip of the remake of Larry Williams and Johnny "Guitar" Watson's "Two for the Price of One." Walter Williams' best lead, "Just Another Guy," tenderly sung in his mercurial baritone, never appeared on a 45. This is an O'Jays fanatics' must-have; the only disappointment is that neither Kerr nor the Poindexter brothers saw fit to feature the late William Powell's chilling falsetto. ~ Andrew Hamilton


Great R&B tracks that never made it. Pre-Kenny Gamble album. Good compositions, arrangements and performanaces. I could do without the fake audience / live concert simulation. It really takes away from some really great studio tracks. Great for Northern Soul fans that can't get the originals on vinal.

74%off
Freda Payne
Come See About Me
$4.19 Super Savings
Add to Cart