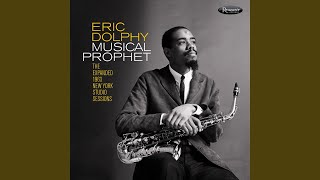 Pitchfork (Website) - "Made months before he cut his masterpiece and almost exactly a year before he died, these newly excavated recordings show the exploratory vigor and versatility of the jazz revolutionary."

Personnel: Eric Dolphy (flute, bass clarinet, alto saxophone).
Liner Note Author: Zev Feldman.
Recording information: Music Makers Stdios, New York City (03/02/1964); Wuom Studios, Ann Arbor, MI (03/02/1964); Music Makers Stdios, New York City (07/01/1963/07/03/1963); Wuom Studios, Ann Arbor, MI (07/01/1963/07/03/1963).
Photographers: Don Schlitten; Jean-Pierre Leloir.
Resonance's Musical Prophet: The Expanded 1963 Sessions collects the albums Iron Man and Conversations, adding 85 minutes of previously unreleased music to the triple-CD/triple-LP set. All of this music dates from early July 1963 sessions with producer Alan Douglas, recorded when Eric Dolphy was between Prestige's New Jazz imprint and Blue Note, and much of it has been reissued before, yet never as thoughtfully as it is here, nor with such sparkling fidelity. Resonance's source for Musical Prophet is a suitcase filled with tapes of these 1963 sessions that Dolphy gave to James Newton just prior to the saxophonist's 1964 European tour. Dolphy died of undiagnosed diabetes on this tour, and these tapes were lost in the shuffle until Resonance restored them for this 2019 release (it received a limited-edition run in late 2018 as a vinyl exclusive for Record Store Day).
Many Dolphy fans will be familiar with the adventurous Iron Man and Conversations, yet Musical Prophet provides revelations because it presents the albums as a piece, along with a full LP's worth of alternate takes, plus two versions of "Muses for Richard Davis" (an elongated, elastic, and ethereal duet with the titular bassist featuring Dolphy on bass clarinet) and a 15-minute alternate take of Bob James' "A Personal Statement." The latter is the only piece not recorded in 1963; it dates from 1964, the same year he recorded his celebrated Blue Note LP Out to Lunch, and its expansive combination of hard-edged bop, operatic vocals, and kinetic avant sax solos feels like a culmination of what Dolphy was essaying in 1963. As such, it fits here, offering a punctuation on a set that paints a rich, detailed portrait of the range of Dolphy's talents. In a sense, Musical Prophet contains elements of everything Dolphy could do: reimagined standards, daring solo pieces, lyrical bop, politically charged protests, multi-instrumental prowess, and hints of multiculturalism. Most of all, this is music of boundless imagination. Dolphy's restlessness remains invigorating and nourishing, particularly when his music is presented with care, as it is here. ~ Stephen Thomas Erlewine