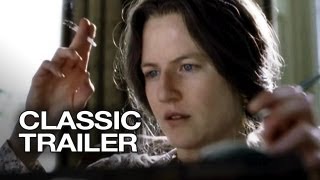 Based on the Pulitzer-prize winning novel by Michael Cunningham, THE HOURS employs Virginia Woolf's classic novel and central character, MRS. DALLOWAY, as its foundation and inspiration. Spanning three different eras, during one day, the film focuses on the parallel lives of three women joined in their depression, alienation, and search for love. Nicole Kidman, wearing a prosthetic nose, is virtually unrecognizable as the tortured writer Virginia Woolf whose ongoing battle with mental illness eventually led to her tragic suicide in 1941. The film begins with the moment of her suicide and flashes back on her life and work as she crafted her most memorable character, Clarissa Dalloway, in 1923. In 1950's California suburbia another woman, Laura Brown (Julianne Moore), struggles with alienation and depression. Trapped by her clinging young son and an adoring husband whom she does not love, the desperate woman tries to prepare for her husband's birthday but cannot stop reading MRS. DALLOWAY. Finally, in modern day Manhattan, Clarissa Vaughn (Meryl Streep), a lesbian who lives with her lover (Allison Janney) and her daughter (Claire Danes), struggles to prepare a party for her ex-husband (Ed Harris) who is dying of AIDS. Director Stephen Daltry uses beautiful overlapping editing to sew the women's interwoven stories seamlessly together. At the core of this profoundly moving film is the trio of award-winning actresses who grace the screen with their bold and awe-inspiring performances.