Rolling Stone: 4.5 stars out of 5 -- "The result is by turns audiobook, podcast, and live album, and at its most potent when it becomes a hybrid of the three." 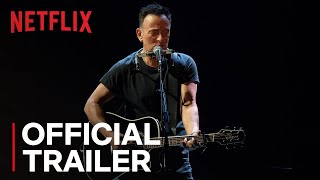 Rolling Stone
4.5 stars out of 5 -- "The result is by turns audiobook, podcast, and live album, and at its most potent when it becomes a hybrid of the three."
Pitchfork (Website) - "Even when Bruce sticks to the script in a playhouse, he can deliver a ranging and intimate performance full of the history and emotion befitting his long career."
Clash (Magazine) - "During this shows he delves into his past, discussing his humble begins and how he became a hero, institution, legend and ultimately The Boss. Oh and the songs are a nice bonus too."

Never in rock & roll history has there been a production like Springsteen on Broadway. Following a busy 2016 which opened with him touring a revival of The River with the E-Street Band and concluded with the publication of his autobiography Born to Run, Springsteen decided to stay in one place for 2017 -- New York City, to be specific, where he began a residency at the Walter Kerr Theatre in October 2017, performing a show based on his memoir. Springsteen on Broadway turned out to be a runaway success, staying on Broadway through December 15, 2018 and commemorated with a Netflix special supported by this double-disc document of the show.
All of the strengths of the production are apparent on the album: the clever construction of the show, where his story is closely tied to his songs, the good humor and earned sentimentality, the illusion of intimacy. What's striking about Springsteen on Broadway as an album, as compared to either its stage or screen version, is that it's possible to hear the pure theatricality of Springsteen's performance, both in his oversized spoken introductions and singing. It becomes very clear that Springsteen is playing the part of Springsteen, exaggerating certain aspects of his life and persona for dramatic effect. This has a ripple effect through the songs -- many of which are quite familiar, with a couple of latter-day numbers thrown in for good measure -- which, in this context, feel written instead of live. Perhaps that punctures the Boss' myth of authenticity for some listeners, but the net effect is a revelation of just how thoroughly and carefully Springsteen turns his life into art: first into song, then into verse, then finally onto stage. ~ Stephen Thomas Erlewine