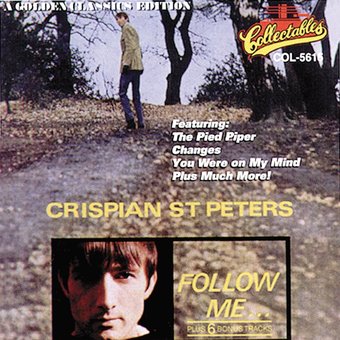 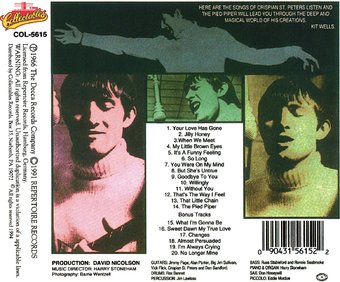 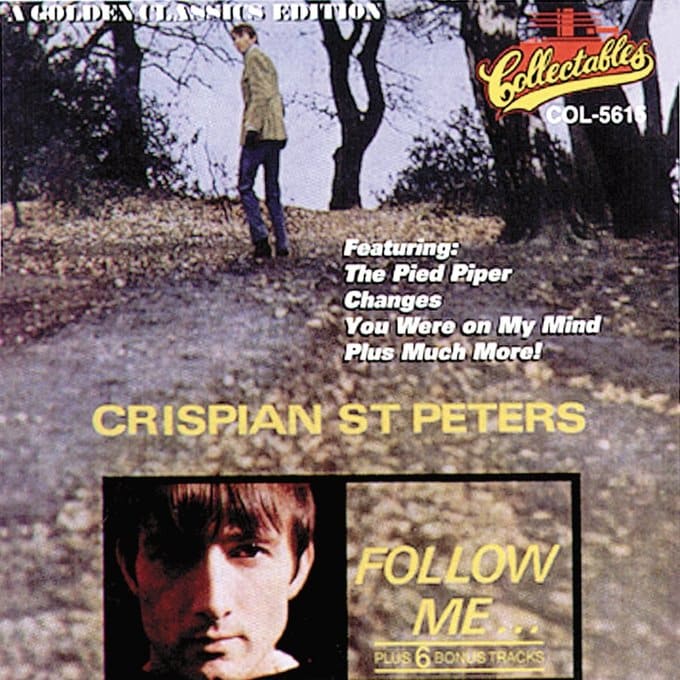 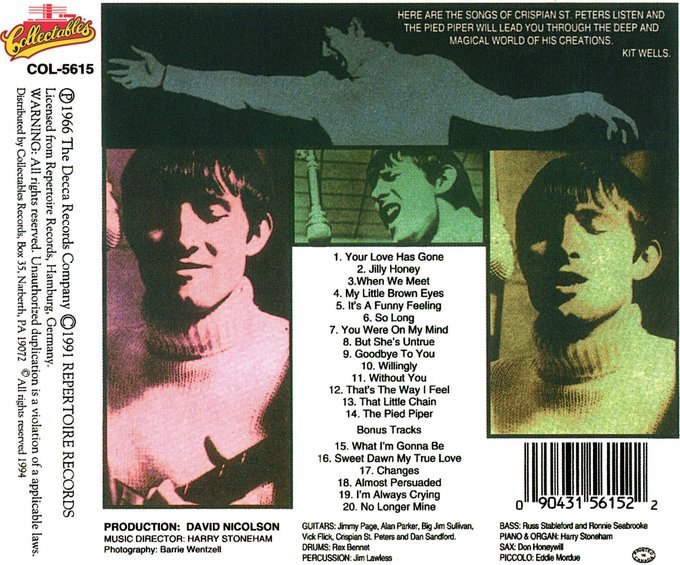 Get email alerts for Crispian St. Peters
22 ratings
Available: Usually ships in 1-3 business days
Only 8 copies left
Add to Cart
Add to Wishlist
Format:  CD
item number:  COL 5615
Related products:
There Stands the Door: The Best of We Five for $13.60
91% recommend us!

Singer/guitarist Crispian St. Peters was a rarity in the '60s - a solo singer and player who hadn't come from an established group. Born Robin Peter Smith, St. Peters did release two mini-classics of the times, "The Pied Piper" and "You Were On My Mind". This disc brings together 20 of his finest songs, which were among the catchiest Pop tunes of their time.

Includes liner notes by Bernd Matheja.
Personnel: Crispian St. Peters (guitar); Dan Sandford, Jimmy Page, Alan Parker , Jim Sullivan, Vic Flick (guitar); Eddie Mordue (piccolo); Don Honeywell (saxophone); Harry Stoneham (piano, organ); Rex Bennett (drums); Jim Lawless (percussion).
Liner Note Author: Bernd Matheja.
Director: Harry Stoneham.
Crispian St. Peters never seemed to really find a style of his own, and his rather low-key career has seen him release light rockabilly, pure pop, country-rock, and folk-rock singles, one of which, 1966's "The Pied Piper," was an international hit and anchored Follow Me when it was originally released that same year. That entire album is included here, along with six period bonus tracks, including an interesting attempt from 1967 to make Phil Ochs' "Changes" into a folk-rock anthem, an attempt that probably came a year or two too late to really click with the public. Follow Me is a pleasant enough folk-pop album, with a few standout tracks like the Byrds-ish "So Long," the Buddy Holly-like "Jilly Honey," and St. Peters' cover of Sylvia Tyson's "You Were on My Mind" (a much bigger hit in a version by the We Five) achieving gentle grooves that work pretty much in the vein of "The Pied Piper." Nothing to crow about here (even with guitarist Jimmy Page on board), but it was to be St. Peters' high point, and in retrospect, deserves to be. ~ Steve Leggett