The untold story of Jekyll and Hyde 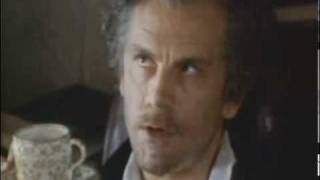 In this moody and melodramatic revision of the classic horror tale, based on the novel by Valerie Martin, the Jekyll and Hyde saga is told from the point of view of the doctor's long-time maid, Mary Reilly (Julia Roberts). Despite Mary's close collaboration with the staid Dr. Jekyll (John Malkovich) and her fascination with his charming "assistant" Hyde, she is unable to realize their true nature until too late.

This Gothic melodrama, adapted from the novel by Valerie Martin, depicts the infamous tale of Dr. Jekyll and Mr. Hyde from the perspective of Dr. Jekyll's naive housemaid, a poor servant girl from gloomy Edinburgh named Mary Reilly (Julia Roberts). Having suffered an emotionally and physically wrenching childhood at the hands of her cruel father, Mary grew up with a dichotomous view of men. It is then fitting that the adult Mary becomes a housekeeper for one Dr. Jekyll (John Malkovich). Slowly, the reserved woman begins to open up to him emotionally, and the two become close. However, as Mary begins to innocently spy on the well respected doctor, she soon discovers strange secrets about his personality, including nightly outings to a seedy bordello run by a vicious madam (Glenn Close). When Jekyll's assistant, Hyde, begins working at the mansion, Mary becomes attracted to him, for he is younger, stronger and more virile than Jekyll. Amidst the ominous walls of the doctor's foreboding home, Mary is forced to realize the truth about her employer and his seductive "assistant."

Sleeping With the Enemy
$5.80 Super Savings
Add to Cart