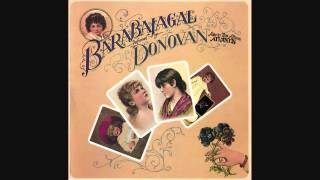 Donovan from the West Coast To Atlantis! With guest appearances by Paul McCartney, Graham Nash and the Jeff Beck Group, Donovan's 1968 smash Barabajagal is an intoxicating sonic feast that includes some of the artist's most imaginative tunes. It sounds extra-magnificent in its original true stereo mix, making this the definitive vinyl edition of this Aquarian-age classic!

Donovan's last truly great album of the 1960s, 1968's BARABAJAGAL shows interesting artistic growth at least as marked as his transformation from folk troubadour to daffy hippie-pop guru. The title track and "Trudi" feature the Rod Stewart-era Jeff Beck Group as Donovan's backing band; consequently both these songs have a surprising amount of sonic heft to them.
Of course, Donovan is pretty much incapable of getting heavy, but the hard-candy pop suits him well. A version of Terry Reid's marijuana/fellatio multiple-entendre "Superlungs My Supergirl" is similarly rockin', but for most of the rest of the album, Donovan reverts to his usual folkish psych-pop. The hit "Atlantis," the Cat Stevens-like "I Love My Shirt" and the unexpectedly tender "To Susan On the West Coast Waiting" are also highlights.

Donovan
Wear Your Love Like Heaven
$27.40
Add to Cart

Donovan
Wear Your Love Like Heaven
$49.20
Add to Cart

Change Begins Within: A Benefit Concert for the David Lynch...
$16.30
Add to Cart