Entertainment Weekly: "...captures the band's earnest pursuit of its Sisyphean mission: to create hard rock that reaches grown-ups and basement-dwelling teens..." - Rating: B

Get email alerts for Metallica
Currently Out of Stock: We'll get more as soon as possible
Notify Me When Available
Add to Wishlist
Format:  CD
sku:  38AGV
Related products:
Metallica: Some Kind of Monster (Live) for $11.98
Our customers love us! 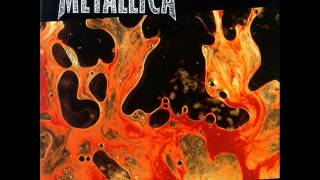 Rolling Stone - 7/11-25/96, p.85
4 Stars - Excellent - "...with LOAD, the foursome dams the bombast and chugs half-speed ahead, settling into a wholly magnetizing groove that bridges old-school biker rock and the doomier side of post-grunge '90s rock..."
Entertainment Weekly - 6/7/96, pp.56-57
"...captures the band's earnest pursuit of its Sisyphean mission: to create hard rock that reaches grown-ups and basement-dwelling teens..." - Rating: B
Q - 7/96, p.119
4 Stars - Excellent - "...These boys set up their tents in the darkest place of all, in the naked horror of their own heads....Metallica make existential metal and they've never needed the props....Metallica are still awesome....What is new is streamlined attack, the focus and, yes, the tunes..."
Melody Maker - 6/8/96, p.49
"...A Metallica album is traditionally an exhausting event. It should rock you to exhaustion, leave you brutalised and drained. This one is no exception. It is, however, the first Metallica album to make me wonder at any point, 'What the f*** was that?' It's as if the jackboot grinding the human face were to take occasional breaks for a pedicure..."
Musician - 8/96, p.85
"...The smoother, broader sound that distinguished...1991's METALLICA is even more apparent here, as is the tendency to write accessible tunes....the exploration of new sounds does nothing but good for the guitar duo of [James] Hetfield and Kirk Hammett..."
New York Times (Publisher) - 6/2/96, Sec.2, p.28
"...On LOAD, Metallica has altered its music, learning new skills. Hetfield has committed himself to melodies, carrying tunes where he used to bark, and he no longer sounds sheepish when he sings quietly..."
NME (Magazine) - 6/1/96, p.44
7 (out of 10) - "...like triumphant warriors returning into a world changed beyond all recognition...Metallica emphatically prove they are still unsurpassed in their self-created genre of stadium nihilism..."

Metallica: James Hetfield (vocals, guitar); Kirk Hammett (guitar); Jason Newsted (bass); Lars Ulrich (drums).
Producers: Bob Rock, James Hetfield, Lars Ulrich.
Recorded at The Plant Studios, Sausalito, California between May 1995 and February 1996.
Personnel: James Hetfield (vocals, guitar); Kirk Hammett (guitar); Lars Ulrich (drums).
Audio Mixers: Mike Fraser; Randy Staub .
Recording information: Right Track Recording, NY (05/1995-02/1996); The Plant Studios, Sausalito, CA (05/1995-02/1996).
Photographer: Anton Corbijn.
The kings of speed metal have never been keen on being labeled, and LOAD, which follows up the 1991 mega-hit METALLICA, is a surprising pastiche of sonic fury. Metallica still rocks hard. James Hetfield's lyrics are still full of venom and anger, and the music still could scare small children. But the band is ready to show off other sides of its craft. "Hero Of The Day" sounds like an R.E.M. song, albeit a heavy one, with its tender beginning and ending confluence of harmonized vocals and catchy guitar riffs. A dose of the blues can be heard in the slow-burning "Bleeding Me," and a downright country twang pervades "Mama Said."
Still, this is a metal album, and there are headbanging riffs o'plenty. LOAD may seem like a departure from the Metallica "norm," but it's actually what the band has been doing all along: writing well-crafted songs without a regard for what others think. The only difference is that the one-time denizens of the underground now have the world's rapt attention.

39%off
Metallica
And Justice For All Body Bag
$15.19 Spring Sale
Add to Cart

32%off
Metallica
And Justice For All Pencil Case
$8.79 Spring Sale
Add to Cart