A lusty hottie excites men to fight and murder in this down south spectacular. / A dirty old man throws out his live-in girlfriend and invites a former stripper to his abode. 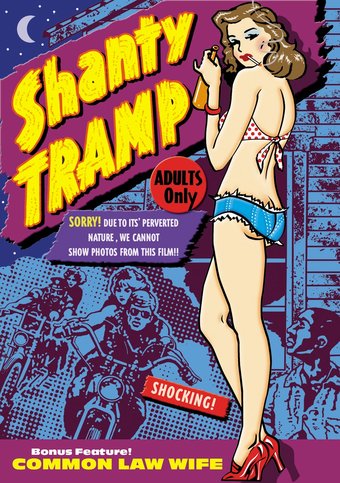 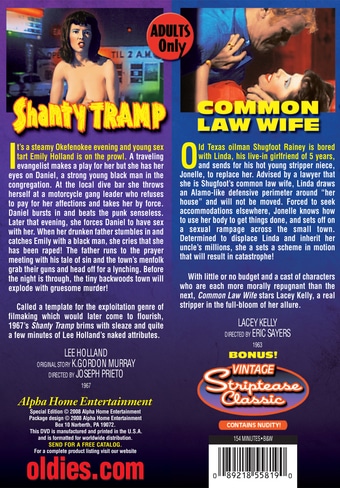 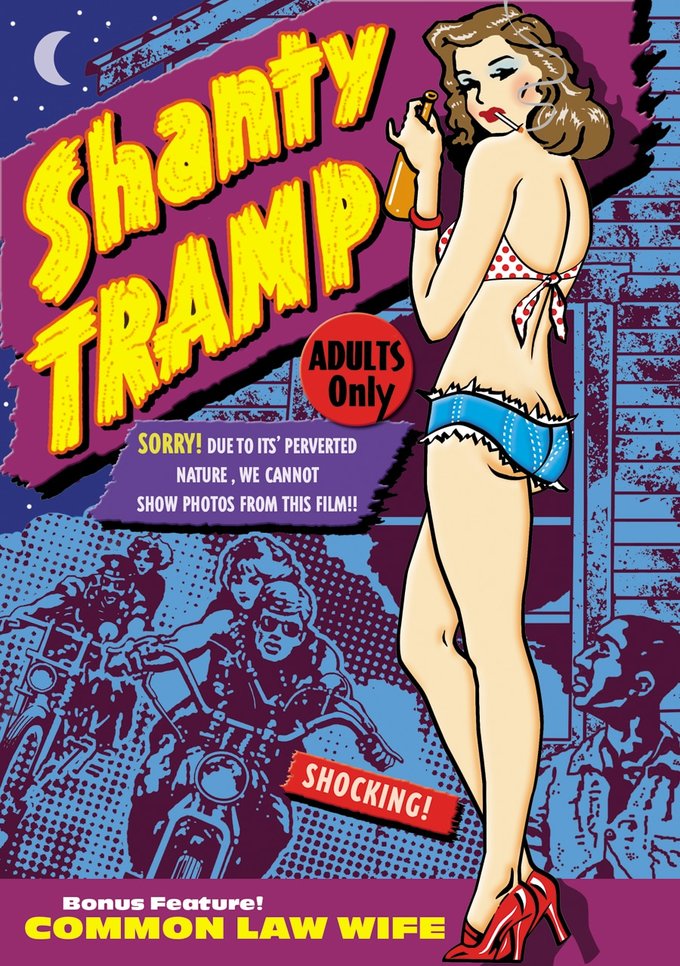 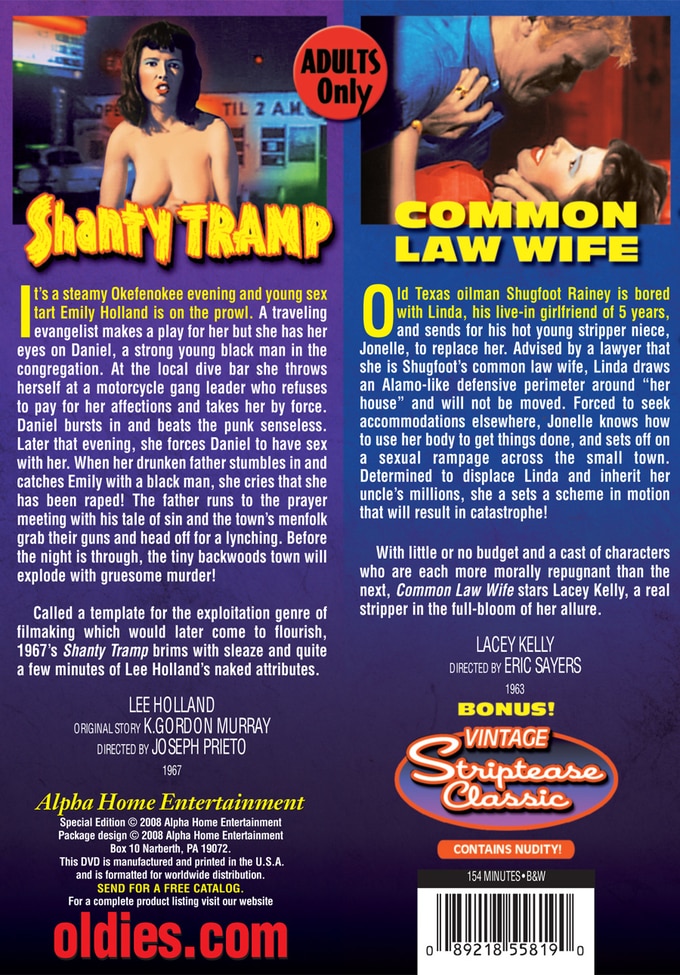 Shanty Tramp (B&W, 1967): It's a steamy Okefenokee evening and young sex tart Emily Holland is on the prowl. A traveling evangelist makes a play for her but she has her eyes on Daniel, a strong young black man in the congregation. At the local dive bar she throws herself at a motorcycle gang leader who refuses to pay for her affections and takes her by force. Daniel bursts in and beats the punk senseless. Later that evening, she forces Daniel to have sex with her. When her drunken father stumbles in and catches Emily with a black man, she cries that she has been raped! The father runs to the prayer meeting with his tale of sin and the town's menfolk grab their guns and head off for a lynching. Before the night is through, the tiny backwoods town will explode with gruesome murder! Called a template for the exploitation genre of filmaking which would later come to flourish, 1967's Shanty Tramp brims with sleaze and quite a few minutes of Lee Holland's naked attributes.

Common Law Wife (B&W, 1963): Old Texas oilman Shugfoot Rainey is bored with Linda, his live-in girlfriend of 5 years, and sends for his hot young stripper niece, Jonelle, to replace her. Advised by a lawyer that she is Shugfoot's common law wife, Linda draws an Alamo-like defensive perimeter around "her house" and will not be moved. Forced to seek accommodations elsewhere, Jonelle knows how to use her body to get things done, and sets off on a sexual rampage across the small town. Determined to displace Linda and inherit her uncle's millions, she a sets a scheme in motion that will result in catastrophe! With little or no budget and a cast of characters who are each more morally repugnant than the next, Common Law Wife stars Lacey Kelly, a real stripper in the full-bloom of her allure.

Murder | Small Towns | Prostitutes / Whores | Strippers
This product is made-on-demand by the manufacturer using DVD-R recordable media. Almost all DVD players can play DVD-Rs (except for some older models made before 2000) - please consult your owner's manual for formats compatible with your player. These DVD-Rs may not play on all computers or DVD player/recorders. To address this, the manufacturer recommends viewing this product on a DVD player that does not have recording capability.

The Bottom of the barrell Movie Lover: John Walter from MIDDLE VILLAGE, NY US -- November, 7, 2010


Excepting for the obvious exposed talents of some ladies in these films, there's nothing worth seeing, The acting is bad, the dialogue is bad, the photography is bad. But there are those obvious talents!


This is a double-feature of trashy fun!

Shanty Tramp whores around town and schemes with a corrupt preacher.

Common-Law wife gets kicked to the curb after her husband decides to upgrade her with his own niece!


The Only Good Thing About This Movie Is The Keep Case!.....The Bucktooth Actress Who Plays The Lead Runs The Gamut Of Emotions From A To A!.If She Was The Last Woman On Earth I'd Go Live In A Cave,...ALONE!..Once You See Her Topless, You'll Know How She Got Her S.A.G. Card!.......The Short "Alice From Dallas" Does Feature The Best 'Perkies" I've Seen Since I Picked Up A High School Hooky Player On My Motorcycle!....Now There's A Title!