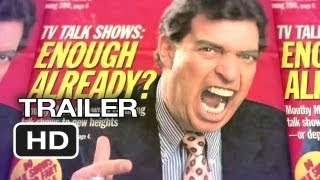 Long before hot-headed guests were trading blows on THE JERRY SPRINGER SHOW, Morton Downey Jr. was transforming daytime television into a smoke-blowing spectacle of rage. With his bulging eyes and a lit cigarette clenched firmly between steel-trap teeth, he took no prisoners while barking vicious insults at his guests and audiences alike. It was the 1980s, and television viewers were transfixed by the man who had no fear, and no apparent filter. But then, as quickly as Downey Jr. had appeared out of nowhere to lower the standards for civil discourse, he was gone. In this documentary, Emmy-nominated filmmakers Seth Kramer, Daniel A. Miller, and Jeremy Newberger chart the motor-mouthed trash TV host's dizzying rise to fame, as well as his thunderous fall from the spotlight through interviews with Chris Elliot, Herman Cain, Sally Jessy Raphael, Pat Buchanan, Richard Bey, and Gloria Allred.

50%off
Overnight: The Story of Boondock Saints' Director Troy Duffy
$3.98 on Sale
Add to Cart