Get email alerts for Marvel Gifts & Collectibles
2.2K ratings
Currently Out of Stock: We'll get more as soon as possible
Notify Me When Available
Add to Wishlist
Format:  DVD
sku:  SS 09612D
Our customers love us! 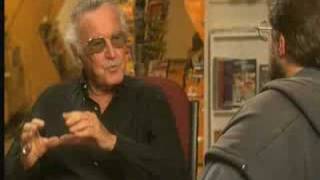 TOMATOMETER
Not Yet Available

AUDIENCE SCORE
Not Yet Available

Stan Lee created one of the most popular comic book characters ever when in AMAZING FANTASY #15, an inventive scientist's radioactive experiment turned him into SPIDER MAN. This study of Lee's life and work has the renown comic book artist conversing with filmmaker Kevin Smith (DOGMA), who was once in negotiations to be helming a big budget version of SPIDER MAN. Their chat includes talk about this motion picture (eventually directed by Sam Raimi) as well as Lee's many other creations from THE MIGHTY THOR to THE INCREDIBLE HULK. The program is in two parts. In the first, "Creating Spider Man," Lee candidly discusses what may be his most beloved creation. Then, in "Here Come the Heroes," he details his 60-plus years in the business of comics.

44%off
Encounters from Another Dimension: 7-Documentary Set (3-DVD)
$5.58 Winter Sale
Add to Cart