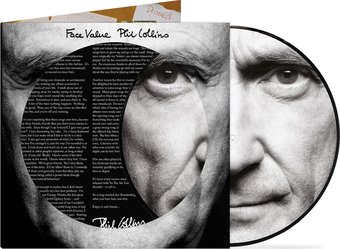 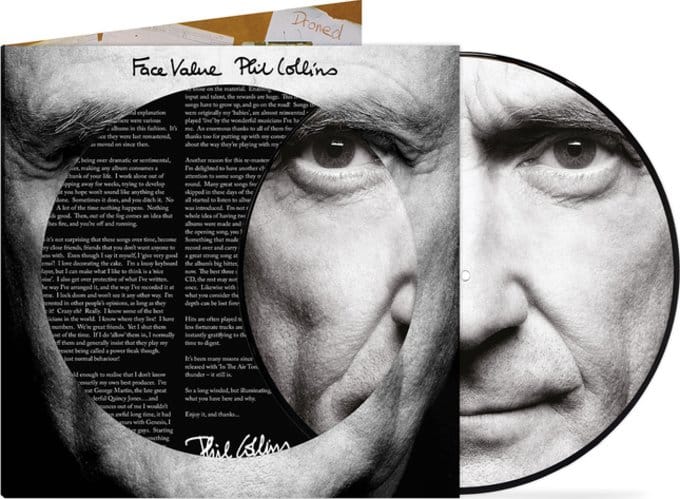 Personnel includes: Phil Collins, Eric Clapton, Stephen Bishop, Shankar, Daryl Steurmer, Earth Wind & Fire Horns.
Personnel includes: Phil Collins (vocals, drums); Daryl Steurmer, Stephen Bishop, Shankar.
Atlantic's Gold Standard Audiophile Compact Discs are gold-plated CDs that boast 20-bit digital reproduction technology for improved dynamics. Each reissue comes in a mini-box that includes the CD jewel box plus a 24-page color booklet featuring new liner notes, photographs and the complete original album artwork.
FACE VALUE contains videos, live performances and home movies principally centered on the making of the 1981 album of the same name.
Phil Collins' first solo album, 1981's Face Value, was a long time coming, but it proved worth the wait, both for the Genesis drummer/vocalist himself and fans of thoughtful, emotionally charged pop. He'd been wrestling with the idea of doing a solo record for years, finding great inspiration in the pain caused by an impending divorce and craving artistic independence after years of collaboration. Many of the songs ended up on Genesis' 1980 album Duke -- and "Against All Odds" was pocketed for later use -- but he kept enough to make an album that stands as a classic moment of '80s pop/rock. Collins produced the album himself and played keyboards and drums, calling in friends and the Earth, Wind & Fire horns to fill out the songs. Kicking off with the bitter anthem "In the Air Tonight," rightly considered one of the great heartbreak songs of all time, the album alternates between moody ballads and bouncily soulful tracks that try to put a smile on the pain. On the quieter songs like "If Leaving Me Is Easy," Collins' wracked vocals leave no doubt that he's not sugarcoating his emotional devastation as he sorts through the wreckage of his life. The poppier tracks, like the snappy "Behind the Lines" and the impossibly hooky "I Missed Again," show off his skills as a hitmaker and vocalist. The pulsing "I'm Not Moving" marries one of Collins' catchiest melodies and airiest productions with the most forceful lyrics on the record. His everyman style of singing translates to both types of songs; he's just as good at wringing every drop of emotion out of the ballads as he is at sailing through the deceptive breezy tunes. His production is very much of the era; fretless bass pops and lush synth pads are very '80s-sounding, as are the huge gated drums. It's also surprisingly subtle at times, though considering that Collins worked with Brian Eno, maybe it's not so shocking. The new agey "Droned" and the swinging "Hand in Hand" give the album some instrumental texture and allow a break from all the desperate emotion on display. The gently sung, sweet-as-punch "This Must Be Love," which was written post-divorce about a new love, also gives an early respite after the lurching, bruising "In the Air Tonight." This range of sound and emotion is part of what helps the album succeed as much as it does; so does the feeling that Collins felt driven to make this album to help him heal. It's not a career move or a cash grab; it's a transmission from a wounded soul delivered with a soft touch and sensitivity. As such, it's Collins' most honest, most compelling work. He went on to become a huge star, with loads more hits, but Face Value stands as his masterpiece and one of the finest moments of the '80s musical landscape. ~ Tim Sendra