In every love story, there's only room for one leading man. 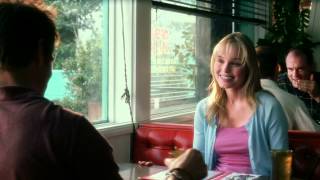 Robert Luketic, the director of LEGALLY BLONDE, helms this retro romantic comedy that stars Kate Bosworth as Rosalee Futch, a modern day Sandra Dee embroiled in a whirlwind love triangle. Rosalee, a naively innocent small-town girl works at her local Piggly Wiggly and dreams of love with movie hunk Tad Hamilton (Josh Duhamel) unaware that her best friend and manager Pete (Topher Grace) is secretly in love with her but afraid to tell her how he really feels. Meanwhile, in Hollywood, Tad Hamilton's bad boy image needs some revamping so his managers (played by Nathan Lane and Sean Hayes) cook up a charity contest to WIN A DATE WITH TAD HAMILTON! in an effort to clean up his act. In West Virginia, Rosalee enters and surprisingly wins, and is instantly whisked away to Los Angeles for a tabloid perfect dream date complete with a stretch limo and make over, much to the chagrin of tortured Pete. What begins as a publicity stunt becomes much more serious as Tad becomes smitten by Rosalee's innocence and honesty. Within days he follows Rosalee back to West Virginia, buys a house, and declares his love to her, shocking not only Rosalee but also the entire town, especially Pete. Back home, Rosalee is forced to choose between a fantasy romance with Tad or the real life love possible with Pete in this classic 1950s style romance that harkens back to the days of Elvis Presley and Sandra Dee.

The Prince and Me
$6.80 Super Savings
Add to Cart