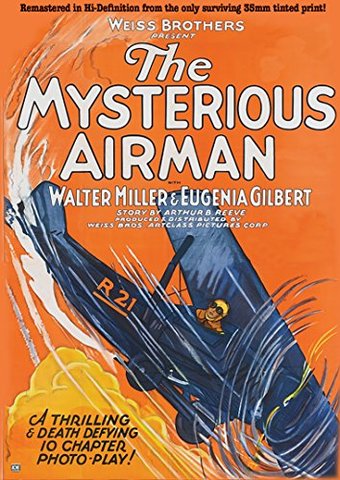 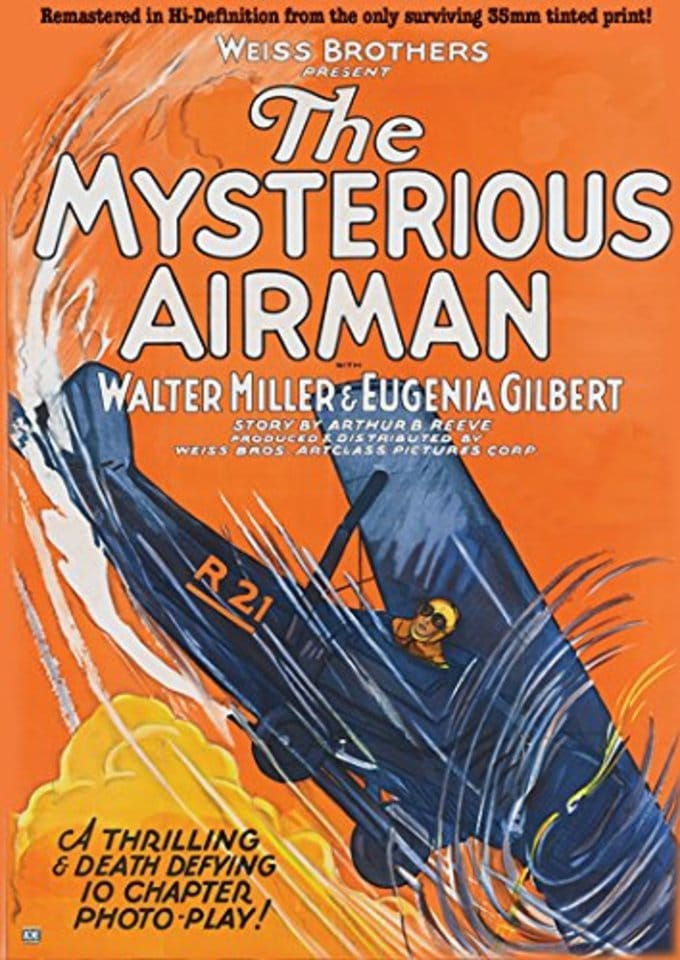 The 1928 silent serial, THE MYSTERIOUS AIRMAN, is a ten-part “Super Chapterplay of the Air” starring silent era-serial superstar Walter Miller and Eugenia Gilbert produced by the long-lasting Poverty Row Producers, The Weiss Brothers.

Featuring vintage biplanes and exciting action, THE MYSTERIOUS AIRMAN was the last silent serial produced by The Weiss Brothers and one of the last silent serials ever produced. Thought to be a “lost” film, Producer Kit Parker, who purchased the holdings of Weiss Global International in 2004, was approached by film archivist, Jeff Joseph of SabuCat Productions, who offered to loan a near-complete original 35mm tinted nitrate print which was missing only the first reel of Chapter Nine. The print was lovingly restored and transferred (recreating the missing reel from stills and plot synopses), and a new piano score was commissioned from ace silent film accompanist Dr. Andrew Earle Simpson, main accompanist of the Library of Congress Packard Campus in Culpeper, Virginia.

This DVD release of THE MYSTERIOUS AIRMAN also features a complete and comprehensive commentary track by noted film historian Richard M Roberts. He weaves a story about the production and the people involved, from stars Miller and Gilbert, co-stars like Robert Walker and Dorothy Talcott to Director Harry Revier and the production staff of Weiss Brothers-Artclass Pictures, a family of low-budget film producers whose filmmaking operations kept them in business from the 1910s up to the 1990s, outlasting some of Hollywood’s major studios.

This release of THE MYSTERIOUS AIRMAN heralds an important rediscovery in film history, as few silent serials exist today in anything resembling complete form, much less in lovely tinted original print quality. It’s a fun, light-hearted cliffhanger that shows the joys of Saturday Matinee moviegoing and what could be done on less-than-spectacular budgets as well as illustrating the early days of flying, seat of your pants filmmaking from the seat of your pants days of Aviation.

Bonus features include “Flying Cadets” (1928) 2-reel short with great vintage plane shots filmed at Brooks Field, TX, New York Censor Board File (some scenes were required to be cut for the serial to be shown in the State of New York!) and a gallery of original posters and lobby cards.

25%off
The Vigilantes are Coming (Serial Version)
$5.95 on Sale
Add to Cart

25%off
The Adventures of Dusty Bates - Complete Lost British Serial
$5.95 on Sale
Add to Cart