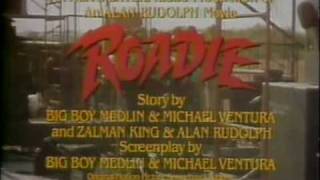 Director Alan Rudolph directed this obscure cult concert comedy while still relatively unknown, and it's quite a rip-roarin' ride for viewers with a fondness for late-1970s nostalgia. Rocker Meat Loaf stars as Travis W. Redfish, a farm boy with a genius for electric engineering that he eventually parlays into the title of World's Greatest Roadie. En route, he falls for groupie Lola Bouilliabase (Kaki Hunter) and helps pursue her dream of meeting rock idol Alice Cooper (playing himself). Their pursuit of Alice leads them on a wild chase across the country, replete with 1970s road movie staples such as barroom brawls, car chases, and burly truckers. Blondie, Roy Orbison, Ramblin' Jack Elliott, and Hank Williams Jr. all make appearances, and Art Carney has a nice bit as Travis's father. There's surprisingly good performances all around, particularly Mr. Loaf's, in his first starring role. Rudolph reveals trademarks of his future films in this early feature--a celebration of American eccentricity and quirk-laden romance, which, along with the plethora of time-capsule perfect music, makes this rockin' cult entertainment.