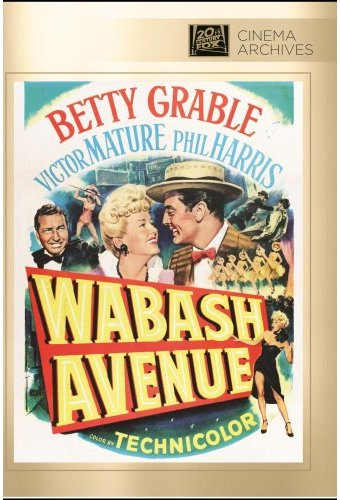 After being cheated out of a dance hall business, Andy Clark tries to get revenge by stealing its star performer, Ruby Summers.

Betty Grable's WABASH AVENUE is an agreeable remake of Grable's 1943 hit CONEY ISLAND. The locale is changed from New York to Chicago, but the plot remains basically the same. Once again, the star is cast as a honky-tonk singer, Ruby Summers, who is groomed for classier show-business endeavors by a handsome producer -- in this case, Andy Clark (Victor Mature). Saloon owner Uncle Mike (Phil Harris) doesn't want to lose Ruby (Grable) for both professional and personal reasons, but Clark is more persuasive, and, frankly, better-looking. Once she reaches the top in a Hammerstein show, Ruby's head is turned by Clark's suave, sophisticated partner English Eddie (Reginald Gardiner). Margaret Hamilton has a wonderful cameo as a Carrie Nation-style saloon basher, while old-time vaudevillian James Barton steals the show with his rendition of such standards as "Harrigan" and "Green River."

Rivalry | Dance | Romance | Love Triangle | Love Triangles | Dancing | Romances | Love | Competitions
This product is made-on-demand by the manufacturer using DVD-R recordable media. Almost all DVD players can play DVD-Rs (except for some older models made before 2000) - please consult your owner's manual for formats compatible with your player. These DVD-Rs may not play on all computers or DVD player/recorders. To address this, the manufacturer recommends viewing this product on a DVD player that does not have recording capability.

Meet Me After The Show
$19
Add to Cart