Running from his past. Hiding from the law. Only one way out. 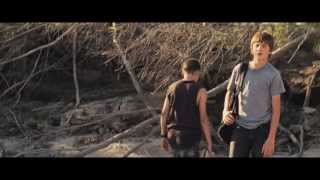 Hollywood Reporter - 05/26/2012
"A] well carpentered piece of work marked by some fine performances and resilient thematic fiber."
Rolling Stone - 04/25/2013
3.5 stars out of 4 -- "McConaughey, on a career roll, is magnificent. his deeply felt scenes with the standout Sheridan hit you like a shot in the heart."
Entertainment Weekly - 05/03/2013
"Nichols has a sense of place that feels authentic....If you allow yourself to settle into its leisurely pace, it will reward you." -- Grade: B+
Total Film - 06/01/2013
3 stars out of 5 -- "With a lack of sentimentality, the appealingly naturalistic performances of the two boys and a slow-burn build-up to an explosive finale, it's a charming, redolent and unexpected pastoral that both intrigues and moves."
Wall Street Journal - 04/25/2013
"[A] newly minted American classic....Mr. Nichols, an Arkansan born and bred, has made a film of striking originality."
Los Angeles Times - 04/25/2013
"There is an ease with which Nichols pokes around in people's lives, unearthing small truths in authentic ways. In MUD, it feels as if he's caught a small slice of backcountry soul like a firefly in a jar."
USA Today - 04/25/2013
3 stars out of 4 -- "A beautifully shot, deliberately paced adventure saga, it explores romantic love from the perspective of an idealistic adolescent."
Chicago Sun-Times - 04/25/2013
3 stars out of 4 -- "Nichols' eye for particulars, his feel for the characters and landscapes (and waterscapes), is so vivid you feel you could get bit by a mosquito or a water moccasin if you're not careful."
Empire - 05/03/2013
4 stars out of 5 -- "[W]hat truly elevates MUD is the sense there's something so much bigger going on here....A bold, intelligent, 21st century take on Mark Twain..."
New York Times - 04/26/2013
"Mr. McConaughey commands attention with a variation on a certain kind of Southern character: handsome but battered, charming but also sinister, his self-confidence masking a history of bad luck and trouble."
A.V. Club - 04/25/2013
"First and foremost, it's another splendid showcase for the ongoing McConaughey Renaissance: He plays Mud as if Tom Sawyer had grown up and gone horrifically wrong, effortlessly projecting rascally charm with a hint of underlying menace."
Washington Post - 04/26/2013
3.5 stars out of 4 -- "McConaughey injects a note of danger into a bayou noir story of youthful ad­ven­ture that manages to be lyrical and sobering at the same time."

A pair of inquisitive adolescents encounter a charismatic drifter with an incredible story in this drama from TAKE SHELTER writer/director Jeff Nichols. Mississippi adolescents Ellis (Tye Sheridan) and Neckbone (Jacob Lofland) are exploring along the mighty Mississippi when they stumble upon a small island inhabited by Mud (Matthew McConaughey), a desperado who claims to be on the run from brutal bounty hunters after killing a man in Texas. According to Mud, his true love Juniper (Reese Witherspoon) is awaiting his arrival in town, and together they plan to make a daring escape. Fascinated, the two boys agree to help Mud slip past his pursuers, despite the potential dangers of doing so. Sam Shepard, Sarah Paulson, and Michael Shannon co-star.

Beasts of the Southern Wild
$5.59 Winter Sale
Add to Cart