Bad Religion How Could Hell Be Any Worse? 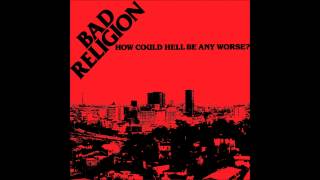 Bad Religion - How Could Hell Be Any Worse? (Full Album) (Music Video)

Spin - 7/92, p.78
"...furious, melodic, in-your-face tunes...The 28-song CD beautifully documents an essential and revolutionary contributor to the L.A. punk scene. You cannot pass this up..."
(Jan./Feb.,1992) - "...The whole thing was remastered from vinyl because the master tapes went up in flames. Nonetheless, it sounds great, and any Bad Religion fan MUST have this--PERIOD!..."

80-85 contains Bad Religion's first full-length album, HOW COULD HELL BE ANY WORSE?..., their first EP, and additional rare material.
Bad Religion: Greg Graffin (vocals); Mr. Brett, Greg Hetson (guitar); Jay Bentley, Tim Gallegos (bass); Pete Finestone (drums).
Principally recorded in Los Angeles, California between 1980 and 1985. Includes liner notes by Greg Hetson.
For newer Bad Religion fans curious about their earlier work, the 1991 compilation 80-85 is highly recommended. As expected, the songs are a lot rawer than their later releases, but a lot of the same musical elements that would be perfected in the 1990s by the band (biting social commentary, melodic twists and turns) are present. Some fans consider this era "the real Bad Religion," as evidenced by such tracks as "Yesterday," "New Leaf," "Along the Way," and "Bad Religion."