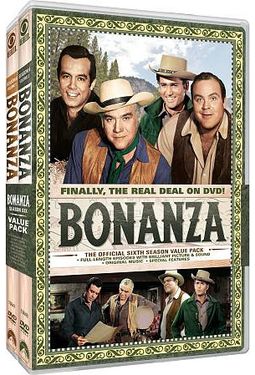 
Bonanza is in the running for perhaps the best television western of all time! This season 6 DVD set was made during the years of 1964-65 when Bonanza soared to #1 in the television ratings! Sadly, it was the last season to feature Pernell Roberts(Adam Cartwright) which to many fans was a shock! Even though Lorne Greene, Dan Blocker and Michael Landon continued another 6 seasons with the show, it's just was not the same without Pernell Roberts! In this collector's item package, you have some of the greatest episodes of Bonanza plus some extra features that you will adore! As I am writing this, I am humming the theme song!