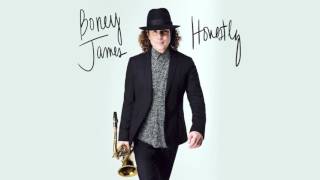 Audio Mixer: David Rideau.
Recording information: Sunset Sound, Hollywood, CA; The Backyard, Los Angeles, CA.
Photographer: Describe The Fauna.
Saxophonist and composer Boney James has been on a roll during the second decade of the 21st century. His three studio albums -- Contact, The Beat, and Futuresoul -- have all topped the jazz charts (the later for 11 weeks); in addition, the first decade netted another in Shake It Up, as well as a handful of number twos. Honestly is his 16th album, and finds him celebrating his 25th anniversary as a solo artist after stints with Morris Day and the Isley Brothers. While his tone and phrasing are instantly recognizable, the production aesthetic on Honestly differs considerably from Futuresoul. Arrangements are a bit sparser, leaving more room for each instrument in the mix: his horn, keys, and drum programming, as well as the session players on guitars, basses, and other keyboards, including a lovely Rhodes piano on the airy opener "Kicks." Vocalist Avery Sunshine assists on the title track single, a lyric presentation of neo-soul that dovetails with the contemporary jazz aesthetic. She is resonant and sultry as James adds ballast in his saxophone fills and synth tags. "Tick Tock" is the instrumental single co-produced Jarius Mozee (Anthony Hamilton, Robin Thicke). Not only does it dig into contemporary R&B, it harkens back to the glory days of CTI and Kudu with its lush horn section, grand piano fills, and James pulling out his best Grover Washington, Jr. in his funky phrasing and solo. "On the Prowl uses a B-3 and a celeste to get at a film noir vibe with guitars accenting blues changes in a minor key as James blows a nocturnal melody. "We Came to Party" has an early Earth Wind & Fire feel, as it lays back through the opening lyrics and choruses to break wide open during the solo saxophone to become a beat-conscious celebration. The biggest surprise is a spectral yet lovely cover of Hoagy Carmichael's standard "Skylark," delivered with restraint and elegance. With an acoustic piano at the forefront, James' horn delivers a contemporary urban tinge. It's followed by another understated soul jam, "If I Can't Hold You," with a fine lead vocal by Eric Roberson. The album closes with "Up All Night," a party jam with slapped basslines, tight, funky, locking rhythms, hummable sax, and bright horn charts. It's all groove, ready for that moment when the party explodes into wildness. This is James at his best, delivering tight vamps and tasty sax lines in a creative exchange with the rhythm section. By any standard, Honestly is another winner by James, and the charts should respond in kind. ~ Thom Jurek

Norman Brown
The Highest Act of Love
$18.10
Add to Cart

Babyface
A Collection of His Greatest Hits (CD)
$6.70 Super Savings
Add to Cart