It's Survival of the Fiercest and Funniest 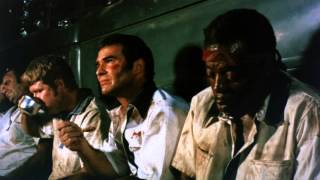 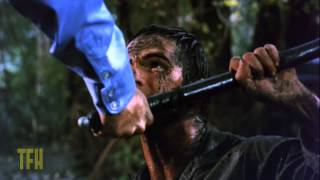 "My, you have lovely hair--ever find any spiders in it'"
- Paul Crewe (Burt Reynolds) to Jessica (Bernadette Peters), who has a fabulous beehive hairdo
"I think I broke his freakin' neck!"
- Samson (Richard Kiel)

In Robert Aldrich's crowd-pleasing classic, Burt Reynolds stars as convict Paul Crewe, a former football player doing time in a prison controlled by two authoritarian sports fanatics, warden Hazen (Eddie Albert) and captain Knauer (Ed Lauter). When Crewe sees that the guards have a top-notch football team, he takes it upon himself to form a squad with his fellow dispirited inmates. As the prisoners come together, galvanized by the chance to challenge the guards, they begin to experience a sense of purpose and solidarity--and Hazen doesn't like it. With the Penitentiary Bowl approaching, Hazen pressures Crewe to throw the big game. Crewe must choose between his own freedom and supporting the newfound dignity of his convict teammates.

Aldrich brings to THE LONGEST YARD the same humor-spiked, antihero-driven feel for rousing adventure shown in THE DIRTY DOZEN and creates a film that matches gridiron favorites NORTH DALLAS FORTY and SEMI-TOUGH while also comparing to classics such as ONE FLEW OVER THE CUCKOO'S NEST, STALAG 17, and THE SHAWSHANK REDEMPTION that reveal the soul-crushing aspects of life under lock and key. Like the latter films, Aldrich's darkly funny, bone-crunching drama succeeds most enduringly by showing the small, barbed, fiercely beautiful refusal of the spirit to surrender.

Customer Rating:
Based on 98537 ratings.


If you are a football and/or Bert Reynolds fan or just s fan of great comedy, this one is for you.????????