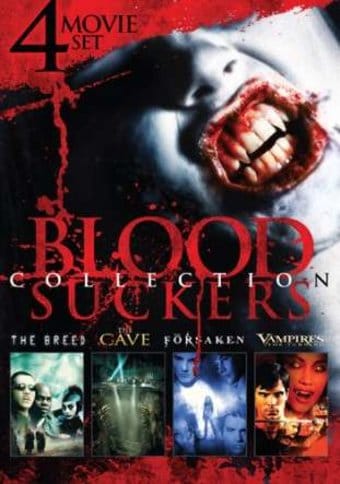 FBI Agent Steven Grant (Bokeem Woodbine) is reluctantly assigned to track a renegade bloodsucker that is bent on exposing a government plan to integrate vampires into society. Along with his new partner "good" vampire cop Aaron Grey (Adrian Paul), Grant follows the clues and the bodies to the lair of the stunningly beautiful Lucy (Bai Ling). Trusting any vampire is difficult for Grant, but when he finds himself falling for Lucy and her exotic charms, the line between the good guys and the bad guys begins to blur, and his next move could be his last.

Deep in the Romanian forest, a team of scientists stumbles upon the ruins of a 13th-century abbey. On further inspection, they make a startling discovery - the abbey is built over the entrance to a giant underground cave system. Local biologists believe the cave could be home to an undiscovered ecosystem, so they hire a group of American cave explorers to help them investigate its depths.

A cross-country road trip takes a dangerous detour when driver-for-hire Sean picks up Nick, a hitchhiker who is on the trail of a band of vampires. At a roadside diner, they encounter a crazed and helpless woman, a recent victim of a vampire feeding, and Sean becomes infected. Now, the three must race against time to track down and kill the source of the virus, a centuries-old vampire with superhuman strength and an appetite for blood.

For 800 years, they've fought to the death among the dark shadows of Thailand's exotic nights. Two armies of vampires. One, ruthless allies of the evil Niran, who delight in feasting on human blood. The other, loyal followers of the beautiful Song Neng, battling to end Niran's brutal reign of terror. Suddenly trapped in this eerie underworld are two American tourists: Amanda, kidnapped by Niran and turned into his blood slave; and Connor, her boyfriend, desperate to save her soul. Now faced with the ultimate sacrifice, Connor must either join the fight against the forces of darkness or risk losing Amanda forever.