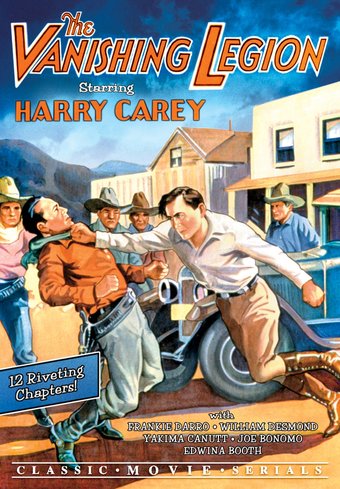 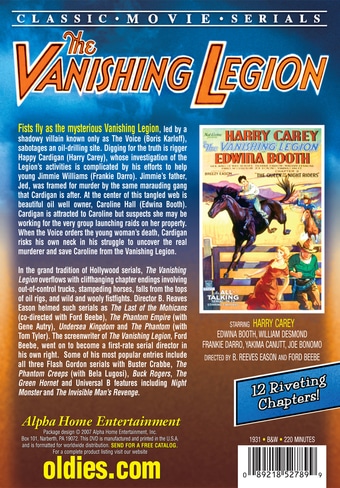 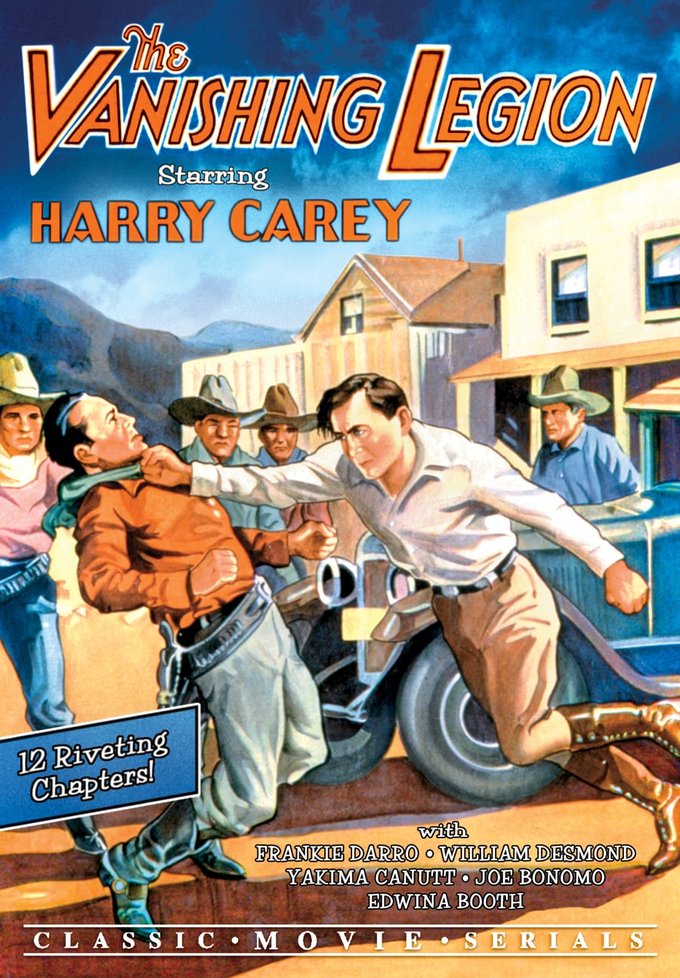 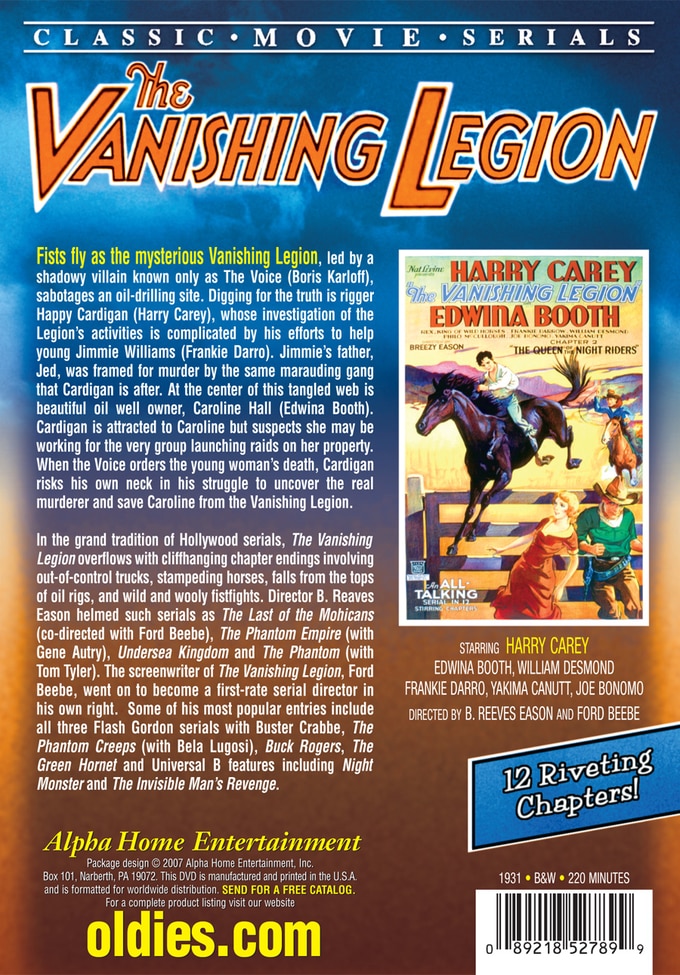 Fists fly as the mysterious Vanishing Legion, led by a shadowy villain known only as The Voice (Boris Karloff), sabotages an oil-drilling site. Digging for the truth is rigger Happy Cardigan (Harry Carey), whose investigation of the Legion's activities is complicated by his efforts to help young Jimmie Williams (Frankie Darro). Jimmie's father, Jed, was framed for murder by the same marauding gang that Cardigan is after. At the center of this tangled web is beautiful oil well owner, Caroline Hall (Edwina Booth). Cardigan is attracted to Caroline but suspects she may be working for the very group launching raids on her property. When the Voice orders the young woman's death, Cardigan risks his own neck in his struggle to uncover the real murderer and save Caroline from the Vanishing Legion.

In the grand tradition of Hollywood serials, The Vanishing Legion overflows with cliffhanging chapter endings involving out-of-control trucks, stampeding horses, falls from the tops of oil rigs, and wild and wooly fistfights. Director B. Reaves Eason helmed such serials as The Last of the Mohicans (co-directed with Ford Beebe), The Phantom Empire (with Gene Autry), Undersea Kingdom and The Phantom (with Tom Tyler). The screenwriter of The Vanishing Legion, Ford Beebe, went on to become a first-rate serial director in his own right. Some of his most popular entries include all three Flash Gordon serials with Buster Crabbe, The Phantom Creeps (with Bela Lugosi), Buck Rogers, The Green Hornet and Universal B features including Night Monster and The Invisible Man's Revenge.

Romance | Suspense | Thriller | Murder | Vintage TV | Television Shows
This product is made-on-demand by the manufacturer using DVD-R recordable media. Almost all DVD players can play DVD-Rs (except for some older models made before 2000) - please consult your owner's manual for formats compatible with your player. These DVD-Rs may not play on all computers or DVD player/recorders. To address this, the manufacturer recommends viewing this product on a DVD player that does not have recording capability.

Customer Rating:
Based on 118 ratings.


Another creaky, but fun serial from Mascot in the early thirties. A mystery fiend known as The Voice is behind a wave of murders and sabotage aimed at an oil field. Harry Carey is the foreman who must ferret out the identity of the evil mastermind. Carey and Frankie Darro as a boy he befriends are a strong pair of heros. Rex the wonder horse is a wild stallion who can be ridden only by the boy and who turns out to play a pivotal role in the story. The rest of the acting is erratic. Edwina Booth is by turns charming, and very stiff in her line readings. William Desmond proves a relic of silent movies. It helps that the supporting cast includes straggle-toothed Bob Kortman as a henchmen and kindly old codger Lafe McKee as a helpful lawyer. The voice of the sinister and rather gabby Voice is provided by Boris Karloff, but he does not physically appear. Another actor is revealed as the murderer.

The action and cliffhangers are very good and the resolutions often creative. The best were the way the unconscious Carey is saved from a herd of stampeding horses, and a later episode in which the heroine walks through a closed door into a room that is not there, only a several story drop.

The mystery element is perhaps too complex, with red herring piled on red herring, all involving a shadowy group of night riders known as the Vanishing Legion, with almost everyone a suspect and all acting guilty as hell. Only Carey, Darro, and Rex avoid the suspicion of being The Voice. Even the heroine seemed guilty on a number of occasions. I was totally confused midway through, but things do straighten out in the last few chapters and the identity of the voice proves most satisfying, as does his fate.

No musical score, and very old-fashioned, with herds of wild horses mixing with autos and trucks, but a lot of fun.


Interesting and good for the time.People of the last 20 or so years would have a time understanding this movie not having grown up with the type of living at the time.Story,acting,and action well done. Fred from Austin.