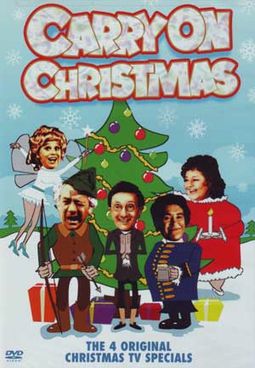 Unseen for many years, these four made-for-TV Christmas Carry On spectaculars feature favourite stories and timely traditions, including Treasure Island, A Christmas Carol, pantomime and much more, in the only way the Carry On team know how-- pure slapstick comedy and scripts full of their trademark innuendo!
Carry On Christmas: Sid James, Barbara Windsor and the rest star in a reworking of the literary classic A Christmas Carol -- obviously though with their own inimitable twist! With added characters such as Dr. Frank N Stein, Dracula, Robert Browning and Cinderella, this special also features a scene-stealing Frankie Howerd.
Carry On Again Christmas: The Carry On team spins their own version of well-known tale Treasure Island. Sid James stars as Long John Silver and Barbara Windsor, in true panto form, plays young Jim Hawkins.
Carry On Stuffing: The classic Christmas pantomime Aladdin features bawdy Elizabethan songs... and what's that going on in the Garden of Eden...'
Carry On Christmas 1973: Sid James returns as a department store Santa, and the Carry On team journeys though the ages to see how Christmas was celebrated by cavemen, Robin Hood and his Merry Men, and also in WWI trenches!