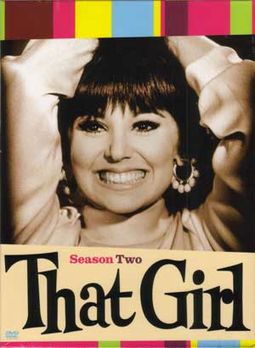 That Show...That Woman...The Creation of 'That Girl': A New Beginning For Women Featurette with Marlo Thomas

Ann and Donald are back for the second season of the groundbreaking hit situation comedy, "That Girl."

Aspiring actress Ann Marie (Emmy-nominated Marlo Thomas) and her devoted boyfriend Donald Hollinger (Ted Bessell) see their relationship grow deeper in Season Two, but Ann still isn't going to put marriage plans ahead of her career. Her determination starts to pay off as Ann finds herself in a play with Ethel Merman, begins to appear in commercials, is cast in a Broadway hit and shows up on the cover of a magazine!

Of course, Ann's doting parents (Lew Parker and Rosemary DeCamp) still worry about their daughter and her father clings to the notion that no man - including Donald - is good enough for Ann.

Starring an endearing Marlo Thomas as Ann Marie, the "girl" of the title, THAT GIRL was a classic TV show and a forerunner of the MARY TYLER MOORE SHOW in its portrayal of an independent woman determined to make it on her own. Living in New York City and attempting to start a career as an actress, Ann Marie also finds time in her busy schedule for her boyfriend, Don (Ted Bessell). Lew Parker plays Ann Marie's father, and Dabney Coleman costars as well.